Walmart is getting rid of greeters; disabled workers worried 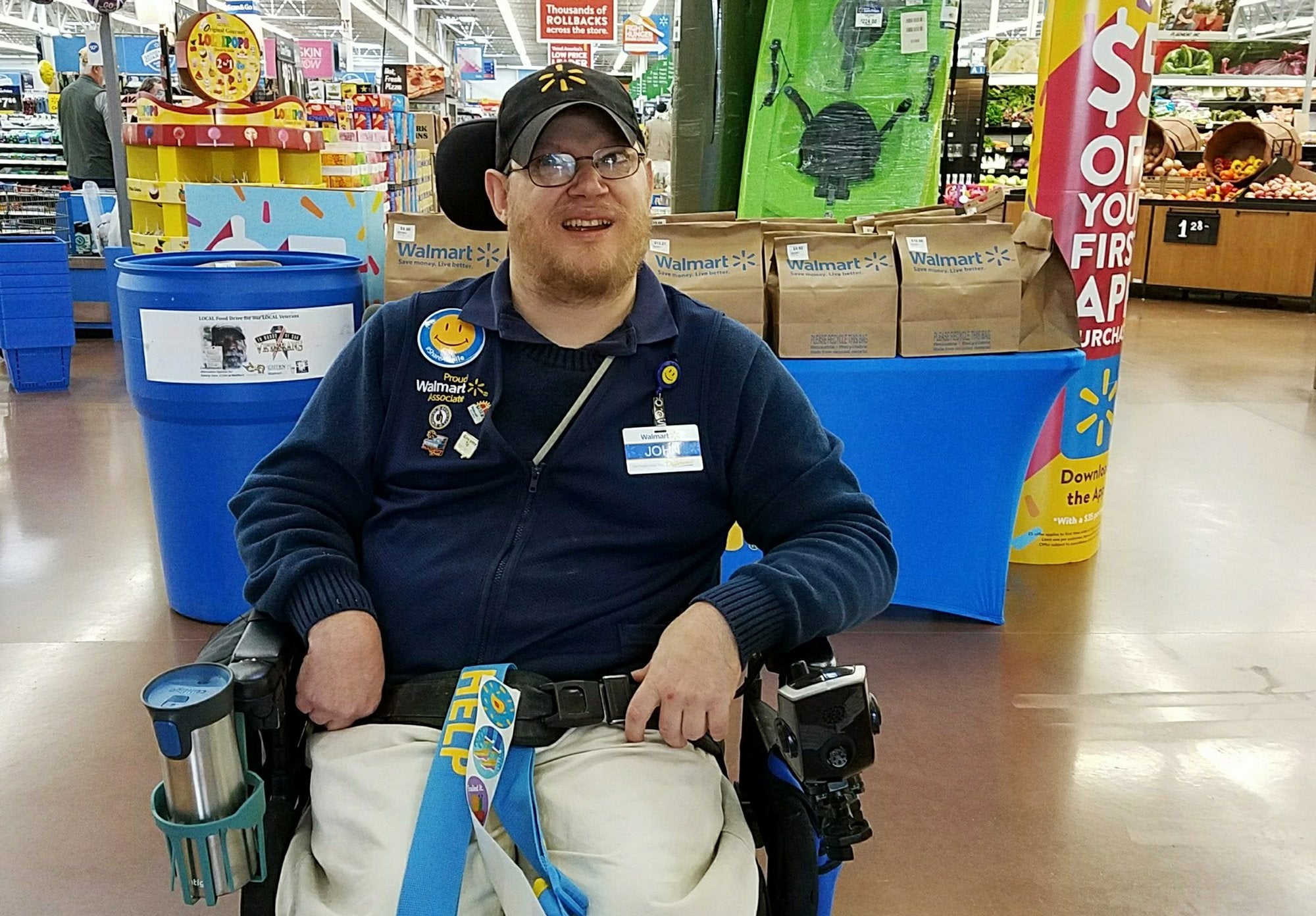 (AP) – As Walmart moves to phase out its familiar blue-vested “greeters” at some 1,000 stores nationwide, disabled workers who fill many of those jobs say they’re being ill-treated by a chain that styles itself as community-minded and inclusive.

Walmart told greeters around the country last week that their positions would be eliminated on April 26 in favor of an expanded, more physically demanding “customer host” role. To qualify, they will need to be able to lift 25-pound (11-kilogram) packages, climb ladders and stand for long periods.

That came as a heavy blow to greeters with cerebral palsy, spina bifida and other physical disabilities. For them, a job at Walmart has provided needed income, served as a source of pride and offered a connection to the community. Now Walmart, America’s largest private employer, is facing a backlash as customers rally around some of the chain’s most visible and beloved employees.

Walmart says it is striving to place greeters in other jobs at the company, but workers with disabilities are worried.

Donny Fagnano, 56, who has worked at Walmart for more than 21 years, said he cried when a manager at the store in Lewisburg, Pennsylvania, called him into the office last week and told him his job was going away.

“I like working,” he said. “It’s better than sitting at home.”

Fagnano, who has spina bifida, said he was offered a severance package. He hopes to stay on at Walmart and clean bathrooms instead.

Theresa Sours, an 81-year-old greeter with heart failure, said she desperately needs her Walmart job to help pay for her medicine and mortgage. Sours, of Stuart, Florida, who’s worked for the chain for more than 18 years, said her manager told her they had no other openings suited to her ability.

“I never thought they would do this. I feel like I’m thrown to the wolves,” Sours said. Her sister-in-law, Cecilia Appleby, was even more blunt: “They’ve done her wrong. They’ve done her absolutely wrong. They just don’t like the handicapped.”

Walmart greeters have been around for decades, allowing the retail giant to put a friendly face at the front of its stores. Then, in 2016, Walmart began replacing greeters with hosts, with responsibilities that include not only welcoming customers but helping with returns, checking receipts to deter shoplifters and keeping the front of the store clean. Walmart and other chains have been redefining roles at stores as they compete with Amazon.

The effect of the greeter phase-out on disabled and elderly employees — who have traditionally gravitated toward the role as one they were well-suited to doing — largely escaped public notice until last week, when Walmart launched a second round of cuts.

As word spread, first on social media and then in local and national news outlets, outraged customers began calling Walmart to complain. Tens of thousands of people signed petitions. Facebook groups sprang up with names like “Team Adam” and “Save Lesley.” A second-grade class in California wrote letters to Walmart’s CEO on behalf of Adam Catlin, a disabled greeter in Pennsylvania whose mother had written an impassioned Facebook post about his plight. Walmart said it has offered another job to Catlin.

In Galena, Illinois, hundreds of customers plan to attend an “appreciation parade” for Ashley Powell on her last day of work as a greeter.

“I love it, and I think I’ve touched a lot of people,” said Powell, 34, who has an intellectual disability. She once rescued a 3-year-old boy who’d wandered into the parking lot and led him back to his parents at checkout.

In Vancouver, Washington, John Combs, 42, who has cerebral palsy, was devastated and then angered by his impending job loss. It had taken his family five years to find him a job he could do, and he loved the work, coming up with nicknames for all his co-workers.

“What am I going to do, just sit here on my butt all day in this house? That’s all I’m going to do?” Combs asked his sister and guardian, Rachel Wasser. “I do my job. I didn’t do anything wrong.”

Wasser urged the retailer to “give these people a fair shake. … If you want to make your actions match your words, do it. Don’t be a wolf in sheep’s clothing.”

With the U.S. unemployment rate for disabled people more than twice that for workers without disabilities, Walmart has long been seen as a destination for people like Combs. Advocacy groups worry the company is backsliding.

“It’s the messaging that concerns me,” said Gabrielle Sedor, chief operations officer at ANCOR, a trade group representing service providers. “Given that Walmart is such an international leader in the retail space, I’m concerned this decision might suggest to some people that the bottom line of the company is more important to the company than inclusive communities. We don’t think those two are mutually exclusive.”

The greeter issue has already prompted at least three complaints to the U.S. Equal Employment Opportunity Commission, as well as a federal lawsuit in Utah alleging discrimination under the Americans with Disabilities Act. Under the federal law, employers must provide “reasonable” accommodations to workers with disabilities.

Walmart did not disclose how many disabled greeters could lose their jobs. The company said that after it made the change at more than 1,000 stores in 2016, 80 to 85 percent of all affected greeters found other roles at Walmart. It did not reveal how many of them were disabled.

Last week, Walmart told greeters they would have the customary 60 days to land other jobs at the company. Amid the uproar, the company has extended the deadline indefinitely for greeters with disabilities.

“We recognize that our associates with physical disabilities face a unique situation,” Walmart spokesman Justin Rushing said in a statement. The extra time, he said, will give Walmart a chance to explore how to accommodate such employees.

Walmart said it has already made offers to some greeters, including those with physical disabilities, and expects to continue doing so in the coming weeks.

But some workers say they have been tacitly discouraged from applying for other jobs.

Mitchell Hartzell, 31, a full-time Walmart greeter in Hazel Green, Alabama, said his manager told him “they pretty much didn’t have anything in that store for me to do” after his job winds down in April. He said he persisted, approaching several assistant managers to ask about openings, and found out about a vacant position at self-checkout. But it had already been promised to a greeter who doesn’t use a wheelchair, he said.

“It seems like they don’t want us anymore,” said Hartzell, who has cerebral palsy.

Jay Melton, 40, who has worked as a greeter in Marion, North Carolina, for nearly 17 years, loves church, Tar Heels basketball and Walmart. His sister-in-law, Jamie Melton, said the job is what gets him out of bed.

“He doesn’t have a lot of things he does himself that bring him joy,” she said. Addressing Walmart, Melton added: “When you cut a huge population of people out, and you have written a policy that declares they are no longer capable of doing what they have been doing, that is discrimination.”