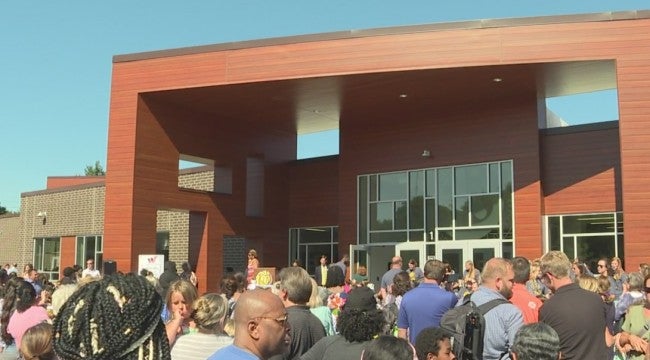 Officials said they have state-of-the-art security to keep kids safe and a special design to help them learn better.

Harcourt Elementary closed in 2008 at 75th Street and Harcourt Road.

It was torn down two years ago and Willow Lake went up in its place.

For Bri Broadnax and her three boys, Wednesday was a chance to finally see where her younger two will be learning.

Willow Lake doesn’t feel like most schools you remember.

There’s no long hallways. Instead, it is split into ‘neighborhoods.’ Five classrooms for each grade are clustered together, all behind a safety door faculty hope they never need.

Broadnax’s son Jeremiah Carroll is starting the first grade. He got to pick his seat out and get a lay of the land before school begins.

The front office has a wall of glass to funnel all visitors through.

There’s a lot of glass throughout, including windows letting in plenty of natural light and even walls separating classrooms from the common areas of the neighborhood, which are large enough for each grade level to work together.

“We’re preparing our students for the next century,” said Willow Lake Principal Brittney Brown. “We’ve noticed children are more active and need that opportunity to move and learn. We’re trying to stay up with the times.”

One of those features is a separate area for buses where students will walk directly into their neighborhood, not the front door. Parents will drop off their kids at the front.

For Superintendent Nikki Woodson, it’s the culmination of almost five years of work, including two voter-endorsed referendums to make this happen.

“Environment impacts the learning experience. Certainly, by creating this innovative environment, we know it will have a positive impact on the teaching and learning process,” said Woodson.

Broadnax hopes she’s right for both Josiah and Jeremiah, who’s in the third grade.

“I look forward to finding that out myself,” she said.

But on this day, she and most of the adults wish they could trade places with their kids.

“I’ve been out of high school for 10 years myself and just to see the new things they are implementing in the classroom is mind-blowing. I’m kind of jealous because I wish I had some of this myself when I was in school,” said Broadnax with a laugh.

The new Clearwater Elementary sits on the site of the old Wyandotte school. It’s identical in everything but the color scheme.

The price tag for each was $23 million. Because they are identical, the district saved a lot of money on the engineering design.

The finances came from a 2016 referendum passed by voters which raised $185 million. Each district school will have some renovations as a result.

Woodson said until now, elementary schools were bursting at the seams and forced kids to attend schools that may have been farther from home because there wasn’t room.

She hopes to have all other renovations done by 2024.

Voters also passed a 2016 referendum which raised $6.5 million over seven years to pay for staffing for the new school.