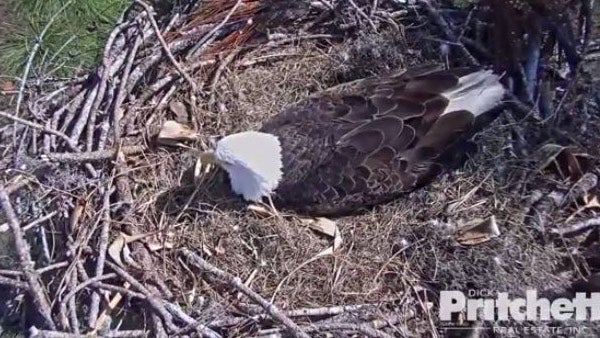 FORT MYERS (WFLA) – Eaglet watch is underway in Fort Myers and you can watch the excitement unfold live on the internet.

A camera is poised over the Fort Myers area nest of American Bald Eagle Harriet and her mate M15, who are waiting for two eaglets to hatch.

Dick Pritchett Real Estate in Fort Myers provides nature lovers with a live look at Harriet and M15’s nest with its Southwest Florida Eagle Cam. The real estate company has been providing a live look at the nest for four years now.

The eagle cam was launched in 2012. Back then, more than 16 million viewers watched Harriet and her mate Ozzie raise their two eaglets. Each fall since then, Ozzie and Harriet returned to the same nest to lay eggs and raise their young until the eaglets were old enough to leave the nest.

Sadly, in September of 2015, Ozzie died from injuries he suffered after getting into a fight with another male eagle.

In October of 2015, Harriet found a new mate, who has been named M15, short for Male 2015. The pair successfully raised two eaglets that left the nest.

Now, Harriet and M15 are awaiting the hatching of two more eaglets. The pair has been taking turns incubating the two eggs in their nest high up in a slash pine tree. Harriet and M15 have been turning and rolling the eggs regularly, according to a blog about activity at the Southwest Florida Eagle Cam. M15 has also brought grass, sticks and fish to the nest.

If you are interested in nature, check out the blog, which includes more details about the eagles’ activity and plenty of photos and videos of the majestic eagles at their nest.