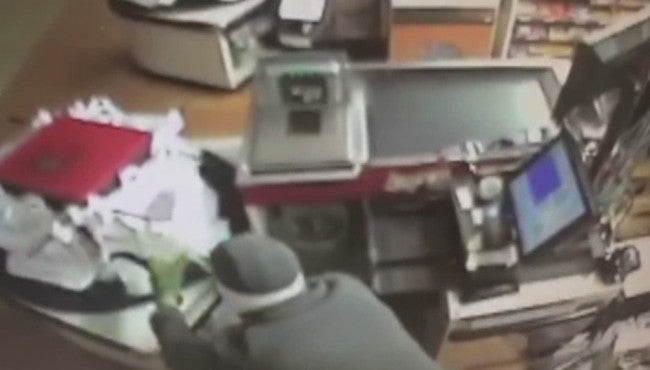 FORTVILLE, Ind. (WISH) — Two men are accused of breaking into a grocery and stealing thousands of dollars worth of Hoosier Lottery tickets, and it was caught on camera.

It happened in the early morning of Jan. 18 at Strough’s Supermarket on North Madison Street.

Police tracked the men down after they tried to cash the winning lottery tickets but couldn’t. Scott Morris, 34, and Billy Loder, 26, are facing several charges including burglary and theft.

A store employee told 24-Hour News 8 the men forced their way into the store by breaking through the back door.

“I think they used a truck to pull the back door open because it’s got three bars on it and a metal bar that goes across it,” said Sabrina Harmon, a longtime employee.

Harmon has worked at the grocery for the past 30 years.

“It’s just crazy. I don’t understand why they want to do something so stupid,” she said.

Surveillance video shows the metal door as it pops open, then soon after that a you can see a man crawling through the open space to get inside.

“They had to have something pretty strong to pull it open, and they just got it opened far enough to squeeze in,” she said.

The man makes his way to the front of the store in the video, and he goes behind the counter and begins pulling the hundreds of tickets. He keeps pulling the tickets before grabbing a bag to stuff everything inside. The whole thing lasted for a couple of minutes.

“They pretty much took the high-dollar tickets, quite a few of those. They didn’t mess with the small-amount dollars,” she said.

But, the man in the video and his partner didn’t get so lucky.

“I thought these guys were pretty stupid because they’re (tickets are) traceable. They must not know that because they tried to cash them in,” she said.

Police arrested Morris and Loder in connection to the crime. Both were being held in the Hancock County Jail without bond.

“Yeah, I saw the pictures,” she said. “One I recognized. He’s a local and he came in here almost everyday.”

Harmon said the store has been hit with theft in the past where people stole tobacco and money. She said she was surprised the burglars went for lottery tickets in the first place.

“I would have went for steaks,” she said and then laughed.

Hoosier Lottery works with police and retailers whenever tickets are reported stolen.

A spokesperson told 24-Hour News 8 each ticket has a special number so they can easily track and put a stop to the ticket to prevent anyone from cashing the prize.