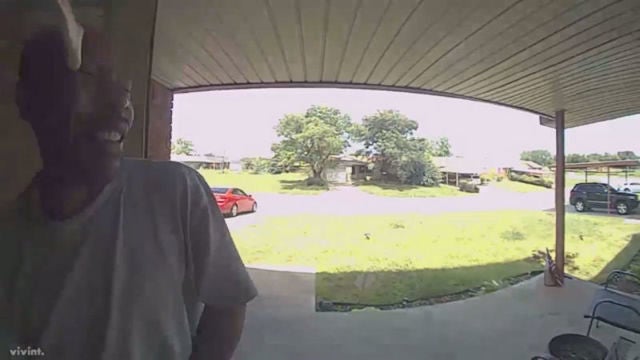 LAWTON, Okla. (CNN) – An Oklahoma man is recovering after he was bitten in the face by a 5-foot-long snake while visiting his friend’s house.

Jerel Heywood visited his friend Rodney Copeland’s home Sunday in Lawton, OK. When he opened the screen door, a more than 5-foot snake attacked him, biting into his face.

The terrifying moment was caught on Copeland’s doorbell camera.

Clutching his face, Heywood immediately pulled the front door open and stumbled inside, yelling that he needed to go to the hospital.

Copeland says at first, all he could do was watch in horror.

Copeland and his wife took Heywood to the hospital, where he was treated immediately. Fortunately, the snake was not venomous, and Heywood says he’s doing OK.

“No stitches, thankfully, but they cleaned me up pretty good,” Heywood said. “I am on antibiotics.”

The snake, which had been wrapped around a porch light, was killed by Copeland’s neighbor.

Copeland says it was the first time he found a snake in his home. He believes it was taking refuge from recent heavy rains and plans to take steps to keep any others away.