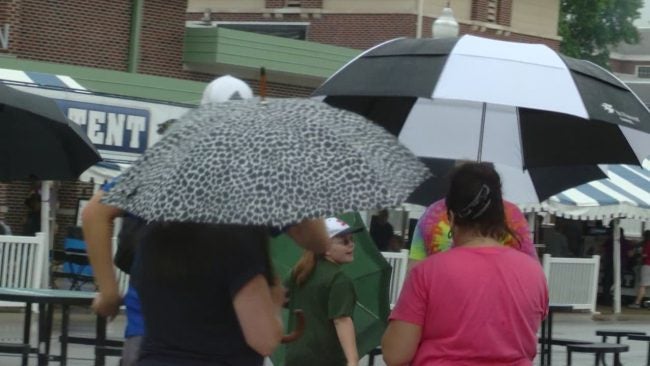 INDIANAPOLIS (WISH) — From the hot and humid temperatures to severe weather, one of our favorite summer events is taking a hit. The weather is keeping people away from the State Fair.

People made their way to the fair on Wednesday, despite the rain.

However, attendance is down. Fair officials said they had to close early a couple of times this week, putting safety first. But, rain or shine, the show must go on.

It’s no secret that everyone’s favorite thing about the fair is the food. It seems the more calories you pile on, the better.

It’s been a tradition for the Reas family to run food stands since the 1930s.

“We have a pizza, turkey leg stand. Then we have our donut burger stand. We have a funnel cake with orange aid, the deep-fried candy and kettle corn,” she said.

But this year, the rain has put a damper on sales.

“We need your business because it did hurt the fair last week and this week,” she added.

And it’s not just the food that is being affected. In the barns, Noah Nisen drove three hours to show off Phlox, his prized dairy cow.

“I knew my brown Swiss cow, she’s pretty good. She won county fair, so coming in I expected her to do well. She got reserve grand, so that’s good,” he bragged.

What isn’t so good is the number of fair goers walking through the barn to see Phlox and the rest of the animals. The fair isn’t faring as well as previous years.

“There’s no doubt the numbers may be off from previous years. But, I will tell you just the feedback that we were getting is people are loving the exhibits. Loving the attractions and honestly, I’ll tell you, Hoosiers love the state fair,” said Hoye.

Some, more than others are willing to walk around…in the pouring rain at the Indiana State Fair, and Reas will gladly welcome them.

“We’re ready if they come out. Hopefully we’ll have lots of lines again tonight and the next three to four days. Hopefully the rain stays away this weekend,” said Reas.

Hoye did not have preliminary attendance numbers, but there is still plenty left to see and do. Tuesday night until 11:00 is midway special. All rides are $2.00 each.

On Wednesday morning, WISH-TV reporters Jeff Wagner and Elizabeth Choi will be competing in the Celebrity Cow Milking contest. It’ll take place at 11:30 in the Dairy Nursery.