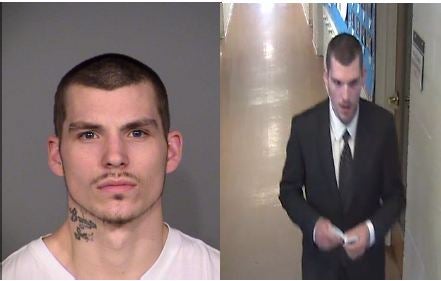 INDIANAPOLIS (WISH) — The alleged “well-dressed thief” has been arrested.

Shane Baker, a man accused of dressing in a suit before robbing churches and other locations, now faces more than a dozen charges.

The Marion County Sheriff’s Office received information that Baker was in Bloomington.

According to the Marion County Prosecutor’s Office, Baker has four open cases with a total of 11 charges for fraud and theft.

Baker is also listed as having an open case in Morgan County with two additional charges.

He was also wanted for an IDOC parole violation.

In total, Baker faces a dozen felony charges and one misdemeanor charge between Marion and Morgan counties.

We Stand Together / 46 mins ago