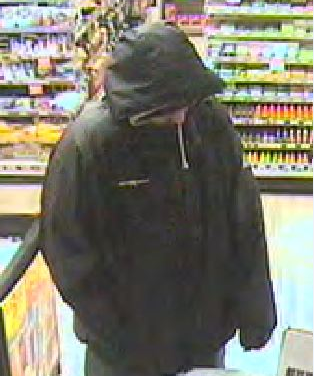 WESTFIELD, Ind. (WISH) – Police in Westfield are investigating two robberies over the past week that happened within just 4-blocks of each other.

The first happened Feb. 8 at the Speedway Gas Station at 201 West Main Street. In that robbery the clerk said a white man, approximately 6 feet tall, with a dark-colored jacket covering his face, and gray sweatpants, entered the store and demanded money. The man got away with cash, and despite officers’ efforts to locate him, the suspect was not found.

On Feb. 13, officers responded to a robbery at the 21st Amendment at 220 East Main Street. In that robbery the clerk told police that a white man, approximately 6 feet tall, muscular build, wearing a dark colored jacket, dark colored scarf covering his face, dark colored knit-type stocking cap, and gray sweatpants, entered the store and demanded money. Police searched for the suspect after he got away, but they were unable to find him.

Police say in both robberies, the description of the suspect is similar. Officers are asking that anyone who may have seen anything at the time of these incidents call the Hamilton County Dispatch Center (317-773-1300) or Crime Stoppers (317-262-8477).