What happened to cause Franklin choir teacher’s arrest unknown 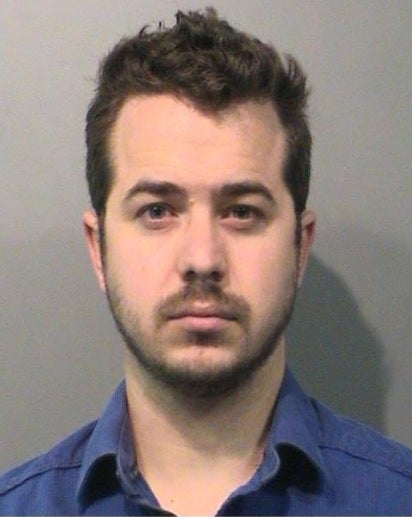 Assistant Choir Director Alex Brickens was on his second year with the high school, according to Franklin Community School Corp. officials. It wasn’t a long time, but long enough to make an unfortunate mark in the community.

From assistant choir director to a spot in the Johnson County Jail, authorities passed along the mugshot of Brickens.

According to online records, he resides in Franklin. He did not answer a knock at the door or a message via via Facebook.

People in the community have plenty to say about the arrest.

“He’s a young dude and worked with the choir kids. Shocking, but at the same time, it’s really not,” said Parker Shepard, who graduated from the high school last year.

Franklin resident Richard Mandabach said, “We send our kids to school to be safe and all that. There’s always crap going on.”

Exactly what was going on is still unknown. There are some clues. Brikens faces a child seduction charge and, in a letter to parents, the high school’s principal, Steve Ahaus, acknowledged students for reporting the alleged misconduct. In that letter he said in part, “The actions that led to this arrest are not acceptable and not who we are at Franklin Community High School.”

According to officials with the school district, on Monday they learned of the accusations and suspended Brickens immediately. Franklin police arrested him on Tuesday. Brickens worked for Center Grove Schools the previous four years, the district said. His future with the Franklin district is contingent on the criminal investigation. However, some in the community have reached their own verdict.

“I just hope they throw away the key. Lock him up,” said Connie Hatley, who has a relative at the Franklin high school.

Brickens bonded out of jail. From here, Franklin police will hand the case over to the Johnson County Prosecutor’s Office to review for charges.

The principal also sent this letter to choir parents about the situation:

FCHS Choir Parents, I am emailing you to make you aware of a meeting I had with all choir and show band students this morning. The meeting was an attempt to share information in two ways: the first part of the meeting involved providing students with what limited information we are able to share about an incident involving Mr. Brickens, Assistant Choir Director. The second part of the meeting was to share some of my personal thoughts and support for all of them.

I opened the meeting by letting them know that we were made aware of Mr. Brickens’ arrest yesterday. Throughout this process, we have been in cooperation with the Franklin Police Department and sharing information under their guidance. We are not able to comment on these legal and personnel issues at this time. The meeting then moved to the role students played in this process and how we can support all of our students through this difficult time. We were able to deal with this issue because some very courageous students were willing to report what they had heard or knew. While I did not use individual names, I praised the students who came forward with information. It was not an easy decision for those students, but they absolutely did the right thing. We stress at every opportunity we have with students the importance of reporting what they hear and know. We are thankful for what these students did and want to make sure they are supported in the coming days. Any negative actions taken towards the students who shared information will be dealt with in a disciplinary way.

I also wanted to share with the group that we are available for support. Dr. Clendening, central office staff, and counselors were in attendance as I shared information. While our ability to talk about the case is limited, our ability to talk with them through the emotions of this incident is not. We want to be able to help them in whatever way we can. The actions that led to this arrest are not acceptable and not who we are at Franklin Community High School.

In the coming days, I would encourage you to let our counseling staff know if we can support your sons and daughters in any way. If they have additional information they feel would be important for the school and police to know please have them share that information with school staff or administration.