What’s behind that grave in the middle of a Johnson County road? 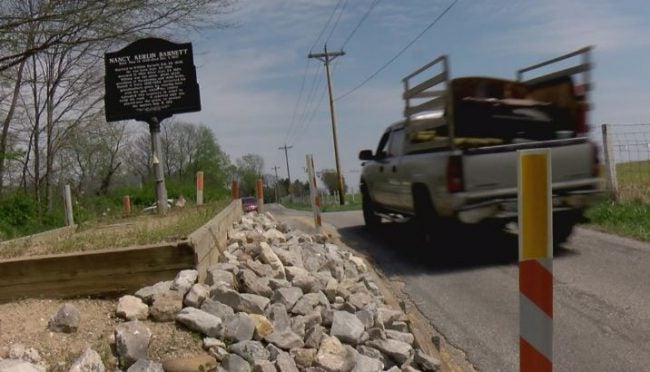 AMITY, Ind (WISH) — We’ve all seen strange things along the side of the road — old mattresses or garbage bags here and there. But, if you take a drive in the tiny Johnson County town of Amity, you might come across something even more unusual, and it’s not on the side of the road, but in the middle.

Amity is a place where it’s easier to find farm land than people. When visitors drive in, they’re not welcomed with a fancy road sign, just a basic, tiny sign that simply reads “Amity.” It’s a place known for a ginormous rocking chair that towers the trees. But it’s also known for a grave in the middle of County Road 400.

“It’s a very unique aspect of Johnson County. As far as we know, it’s the only grave like that in Indiana,” said Johnson County Museum Director David Pfeiffer.

The grave belongs to Nancy Kerlin Barnett. She was buried in 1831 at the age of 38. Nobody knows how she died. Barnett was one of the first inhabitants of Johnson County. You can still faintly see her name etched in the tombstone.

At the Johnson County Museum, there are files stored that give clues as to who this woman was.

“When she passed away her wish was to be buried on a bluff overlooking Sugar Creek. It was, according to the stories, one of her favorite places to go. She loved to fish there and walk there. So her family honored that wish when she passed away,” Pfeiffer said.

Over time, others were buried in the same area until the early 1900s when the county to build a bridge over Sugar Creek and a road nearby.

There are no known pictures of Barnett, but there is one of Daniel Doty. Pfeiffer says it’s rumored that Doty guarded his grandmother’s grave by staying on it with a shot gun as county officials relocated the other graves. In 1912, a concrete slab was placed over the grave to protect it. Even with the grave permanently there, what is now County Road 400 was built around it anyway.

“This is where she was buried. I think there is a lot of power behind cemeteries and wishing to honor those who have passed away before us,” Pfeiffer said.

A memorial plaque at her grave says Barnett’s husband is the great, great, great grandson of Pocahontas. Since the road is narrow around the grave, officials are planning to temporarily remove the body later in May. They will lower the grave and build a wall around it, allowing them to widen the road.