What’s with all the noise at Camp Atterbury? 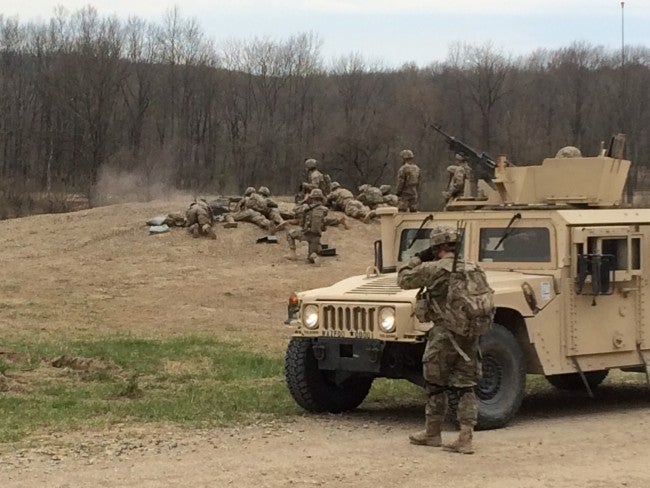 Training this week at Camp Atterbury is fast, demanding and most of all, loud. 400 soldiers from Fort Bragg, North Carolina are using the camp to keep fresh.

The objective is to provide this unit a real-life, combat zone drill. It may be practice, but it’s all real, right down to the bullets and the dynamite.

“It’s a matter of keeping at a state of readiness because we could get the call at any moment when we’re on the GRF, or the global response force, and we have an obligation to answer that call within 18 hours,” Ivezaj said.

Getting ready for that call has its downside for people living nearby. A quiet neighborhood can quickly turn into a warzone.

“I was just sitting in my car, and just felt a boom, and I didn’t see no lightning or anything,” Amity resident Dave Letellier said.

“Sometimes it gets so bad your pictures shake off the walls,” Amity resident Kim Cochrin said.

While there are no casualties, the unexpected noise Andrea Roberts said can create some.

“I was actually out in the garage and actually dropped my cell phone and it took me by surprise that it was so loud and it broke the back of my cell phone,” Roberts said.

Her father, Letellier, served in the military. While it’s a disturbance, he knows how critical this training can be.

“You’ve got to kind of expect it and roll with the punches and I kind of like it,” Letellier said.

Not everyone is happy. Cochrin doesn’t understand why it’s happening during the week and in the middle of the night.

“We realize they have to have it, but if they could do it more like during the day,” Cochrin asked.

WISH-TV saw the group training during the day, but this same drill is run at night and can last six hours.

That noise that sounds a bit different than in the past. The airborne group uses heavy weapons and the guns are bigger than years past. While it may cause a few nights of unrest, military members insist this training is worth it.

“Knowing that we’re trying to our best, to be the best, and to ensure that we keep our society and our country safe,” Ivezaj said.

The group will be gone by this weekend.

There will be more weapon training at Camp Atterbury next month, but it’ll take place during the weekend. The military is also hosting an open house at the camp to show neighbors what’s going on.