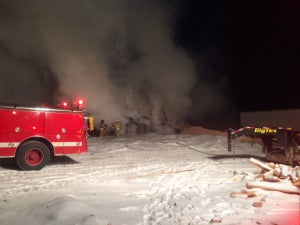 Additional departments were called to provide manpower and water.

Crews had most of the flames out in about an hour, but thick smoke encompassed most of the area as crews worked to put out hot spots. Several workers at the property were using heavy equipment to help firefighters clear debris. All three buildings were badly damaged, but the extent of the damage was unknown.

Gardner said workers had been welding inside one of the buildings Monday and a spark may have caused the blaze. However, Gardner said the investigation was ongoing and no official cause had been determined by Tuesday morning.