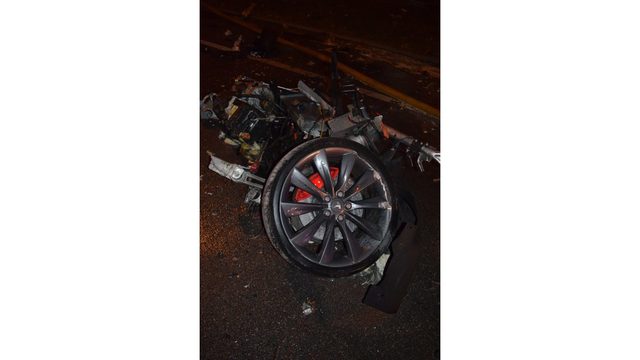 Driver Casey Speckman, 27, and passenger Kevin McCarthy, 44, died at a hospital after the Nov. 3, 2016, crash on Illinois Street near 16th Street. Indianapolis Fire Department said at the time that Speckman lost control of McCarthy’s car, which crashed into a tree and the WFYI-TV parking garage before bursting into flames in the early morning crash.

The crash report said Speckman had a blood-alcohol level of 0.21; a person with a level of 0.08 is considered to be driving drunk in Indiana.

The driver and passenger were co-workers at Express Software and Services in Indianapolis. McCarthy’s wife, Stacey, filed the lawsuit in Alameda Superior Court in California, according to her litigation team.

A news release from the litigation team said Speckman lost control of the 2015 Tesla Model S “due to an un-commanded acceleration defect in the Model S.”

The litigation team said Speckman was attempting to avoid an oncoming vehicle headed the wrong way on Illinois Street, a one-way street.

The release said, “Mr. McCarthy was observed alive postimpact attempting to escape the vehicle. However, due to defects in the vehicle, he was unable to do so, causing him to literally burn alive and to inhale toxic gases. After almost twenty minutes, he was pulled from the vehicle by Indianapolis Fire Department and transported to an area hospital where he died due to the injuries he suffered during the post-impact fire.”

The wrongful death lawsuit notes complaints of fires from the lithium ion batteries as well as the car’s faulty door handles and problems with “un-commanded acceleration.”

In February 2017, Tesla issued this comment on the crash: “We have been deeply saddened by this accident and have been working closely with authorities to facilitate their report. While it can be difficult to determine the precise speed of a vehicle in such a crash, the observed damage and debris field indicate a very high speed collision.”

A recent news release at Tesla.com talks about the vehicle’s more advanced safety features. The release says, “While no car can prevent all accidents, we work every day to make them less likely to occur. The massive amount of real-world data gathered from our cars’ eight cameras, 12 ultrasonic sensors, and forward-facing radar, coupled with billions of miles of inputs from real drivers, helps us better understand the patterns to watch out for in the moments before a crash.”