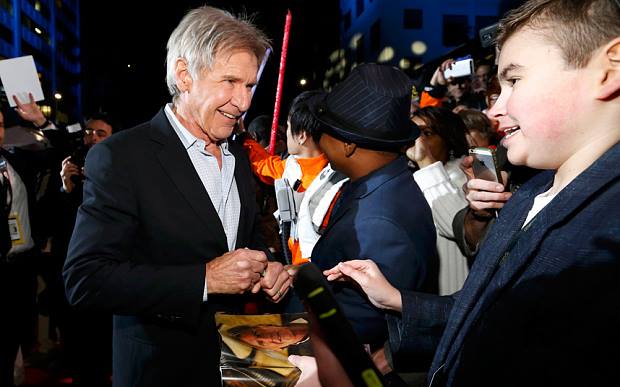 With the help of the Make-A-Wish Foundation, McGee got the once-in-a-lifetime chance to not only meet the cast of the movie along the red carpet, he got a seat for the premiere.

“I felt like I was having the greatest time of my life,” Ayden said as he FaceTime called his mother Rochelle Nelson and sister Emma McGee from California Tuesday evening.

Ayden was still riding the high of meeting and taking pictures with an endless list of celebrities including George Lucas, JJ Abrams, Mark Hamill, Daisy Ridley, Carrie Fisher, and John Boyega. But he said none of that compared to the moment he met Harrison Ford.

“When Harrison Ford came on the red carpet everyone just exploded. Everyone started chanting ‘Han shot first’ and a lot of people in the Make-A-Wish portion were like saying ‘Mr. Ford over here’,” he said. Ayden also got a few pictures with Ford as well as his autograph.

“I was talking to my mom this morning on the phone and she said you can see his dimples, both of them which means that he’s really smiling,” Nelson said with excitement.

Ayden’s happiness was a feeling his family always wanted for him, especially after what he went through. In 2012, doctors found a non-cancerous tumor in his brain. A year later he suffered a stroke after coming down with pneumonia. But through all of his treatment, his family said he remained the most upbeat of everyone.

“He is my hero for going through that for being positive and happy about it,” Emma McGee said. “Seeing him being able to have this opportunity makes me…I’m just so happy and excited for him.”

She’s also thankful that Make-A-Wish delivered a gift unlike any you’d find under a tree this holiday season.

“I just wanted to say thank you to Disney and Make-A-Wish for making this possible for me and the other kids that were there,” said Ayden.

Ayden was part of a group of kids Make-A-Wish sent to the movie premiere. They spent the next day at Universal Studios.

“After everything that he has endured…it is…it is amazing to watch that and I can’t even express what it means,” Nelson said.

“I felt part of a really big thing because just the fact of meeting the cast of probably one the most anticipated movies of 2015,” Ayden said.