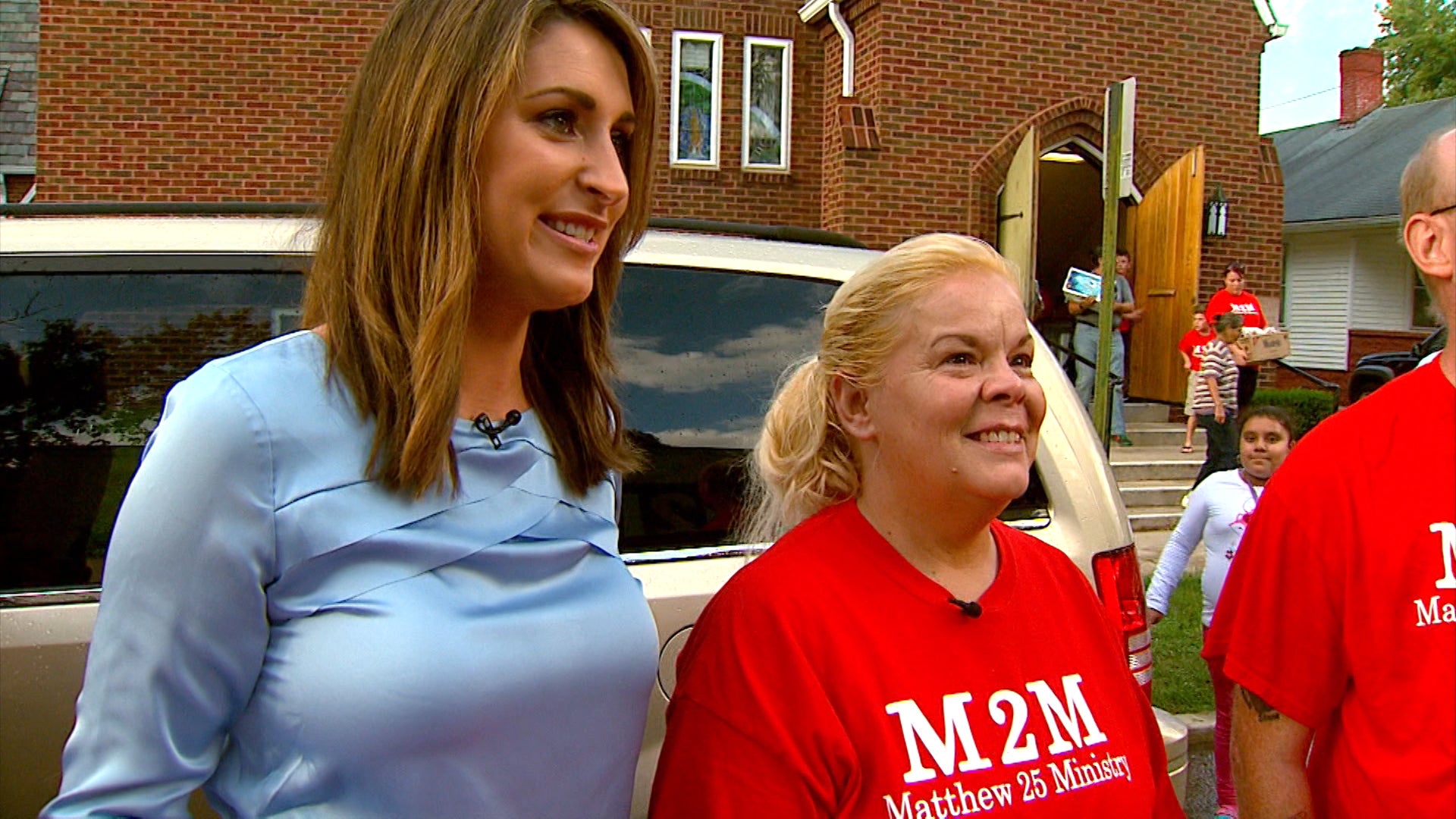 SHELBYVILLE, Ind. (WISH) – On any given Tuesday evening, hundreds of people can be found lined up outside Trinity United Methodist Church in Shelbyville.

No questions asked, no restrictions, no requirements: the M2M Food Pantry inside the church is a no judgement zone.

At the heart of it all is Jana Hartwell Crisman.

Jana and her friend, Timothy Green, started the food pantry two years ago.

They knew there were a lot of people hungry in their town, but they didn’t have a way to help.

Most distributors wouldn’t give their surplus food unless you had a box truck to pick it up. So Jana started baking cakes — $20 here, $30 there, until she had enough to buy a used truck.

“Without her picking up donations and giving all that she gives, there wouldn’t be anything,” said volunteer Pamela Erickson.

“There was several months that the pantry had little food. She would take food out of her own freezer and bring to make sure nobody left here hungry. I’ve seen her take her coat off and give it away because it was cold, and somebody was standing outside,” said Erickson.

Alone, Jana drives to Indianapolis to pick up extra bread, meat, vegetables and other donations that keep the pantry shelves full.

But as food donations kept coming, Jana’s sister says so did a bump in the road.

“Right now we don’t have a truck because the brake line broke, and I wrecked it,” said Baxter.

The truck was totaled, but Jana didn’t quit.

When we heard her story, we knew it was time for the WISH Patrol to step in.

First up, we reached out for the help of Tim Rowe of Rowe and Hamilton Law Firm.

“You have been such a blessing to this community and such an angel to this community in how you fed and helped people in Shelbyville. So, The Law Firm of Rowe and Hamilton wanted to help you buy some food, so we’re presenting you a check for $2,500. Thank you so much, and we know you’ll bless the community with it,” said Rowe.

Next up was a surprise for Jana to do something she doesn’t do much: take some time for herself.

Harry & Izzy’s Steakhouse donated $250 for Jana to enjoy a nice dinner out.

The JW Marriott Hotel downtown donated a night’s stay and breakfast so Jana could kick back and relax.

Just when Jana thought her surprise was over, we asked her to come outside, where her new box truck was waiting.

Randy Koorsen and his daughter Kelly Hoffman, with Koorsen Fire and Security, jumped out of the truck and handed the keys to Jana.

“We use the truck two or three times a week, and that’s where all this food comes from. If it weren’t for having a truck, we wouldn’t be able to get it here,” said Jana.

A big beautiful logo wrapped the sides of the box truck, courtesy of Sign Craft Industries.

“I like it. They did an awesome job,” said Jana.

Unbeknownst to Jana, there was one final surprise waiting from Greg DeWitt of Granite Transformations.

“We thank you for everything you do for the community. And I know it takes a lot of planning and a lot of gas to shuffle all that food around, so we want to help you out with a check for $500 for gas,” said DeWitt.

“Wow. Oh, wow, thank you so much! Thank you. You all, this is so incredible,” said Jana. “I’m usually not at a loss for words, but I’m speechless. This is incredible. Things like this just don’t happen to somebody like me. But I thank you guys so much and appreciate it so much, and it’s going to help so many people.”

Just as we were about to leave, we noticed what M2M stands for, written boldly on each red shirt: Matthew 25 Ministries.

We asked Jana why she does what she does.

“Because I know what it’s like to be hungry, because I know what it’s like to just need somebody to show you that they care. And we may not be able to go out and touch everybody, but we’ve been bringing so many people in here and just spreading love through giving them food. When they think that nobody cares or when they’re just having a rough time, they can come here and get what they want with no judgment and no questions asked. We just freely give it to them, and this going to help us so, so much.”

Is there someone you think the WISH Patrol should pay a visit? Fill out this form and help us share their story.

This WISH Patrol surprise would not have been possible without our generous supporters: