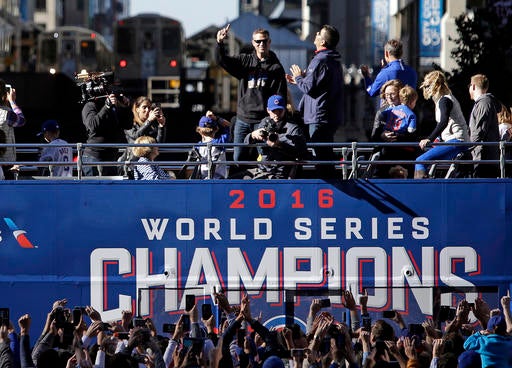 INDIANAPOLIS (WISH) – WISH-TV and MyINDY-TV 23 will continue as your local home of the Chicago Cubs and White Sox, broadcasting over 100 regular and preseason games.

President and General Manager Randy Ingram made the announcement Friday:

Following a record-breaking season for the World Champion Chicago Cubs, WISH-TV and MyINDY-TV 23 are thrilled to welcome the Cubs and White Sox back in 2017. Central Indiana fans and advertisers can once again look forward to a robust broadcast schedule this year, including five preseason games and more than 100 regular season games.”

Fresh off their first World Series Championship since 1908, Jon Lester, Jake Arrieta, Anthony Rizzo, Kris Bryant and a young Cubs nucleus will look to win back-to-back titles and be the first team to do so since the 2000 Yankees. While every member of last year’s team will have a free pass for life in Chicago, they’re already plotting an encore. The 2017 season could be the beginning of a dynasty on the north side of Chicago.

It’s been a rough couple of seasons for the White Sox, and while the future looks bright, 2017 doesn’t look as promising. Trading key contributors Chris Sale and Adam Eaton in a pair of moves signaled an obvious rebuild is underway. The Sox still have veterans in the form of Jose Quintana, Todd Frazier and Jose Abreu, but all three may have new homes by the middle of the summer, so it’s all about a youth movement on the south side of Chicago.

The preseason schedule is below:

Regular season game schedules will be released this spring.

WISH-TV and sister station MyINDY-TV 23 will broadcast the games, produced by WGN Sports, in high definition.