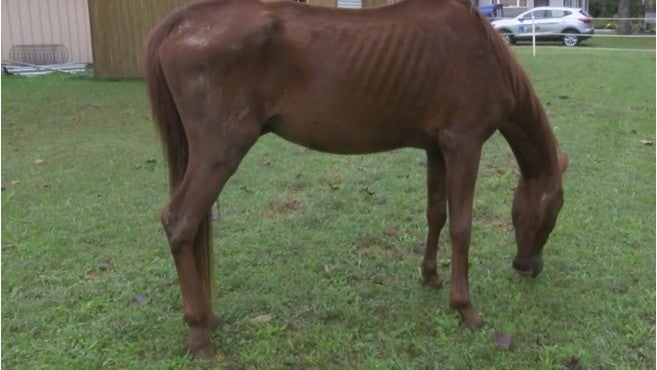 SULLIVAN, Ind. (WTWO) – Last week, a horse that appeared malnourished was found in northern Sullivan County. Before charges could be filed against the owner, Sullivan County Prosecutor John Springer needed answers as to why the horse was in such bad condition.

The owner of the horse has been identified as Lauren Hood of Farmersburg, and she faces one count of animal neglect, a Class A misdemeanor.

Springer says he found these answers after he received a report from the state veterinarian detailing the horse’s condition.

“He indicated that yes, the horse was an older horse, but there was some measures that the owner should have taken to help the horse’s condition, and those had not been done,” said Springer.

The animal was sent to the Horse Shoe Equine Rescue in northern Vigo County for recovery, where the director of the facility says that the horse is improving.

“He’s getting multiple feedings a day, he’s getting a lot of supplements, and some special feed. It seems to be working a little bit. He’s getting little bit of a belly on him,” said Ron Barnett, Horse Shoe Equine Rescue director.

Although the horse is showing improvements there is still a long road to recovery. “Probably 6 to 8 months before he actually gets back to where he should be.”

In addition to Horse Shoe Equine Rescue, Springer says there are many options for animal owners if they cannot provide the care animals need. “There’s a lot of resources out there for help. If people reach out to the Humane Society, there are a lot of people.”

Hood is expected to appear in court next month for her initial hearing.