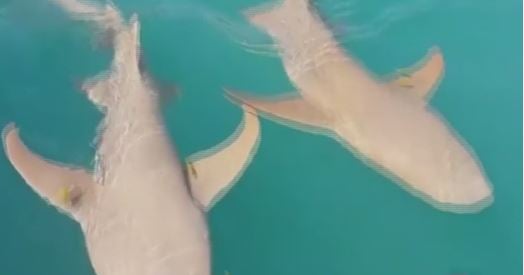 AUSTRALIA (WFLA/CNN) – An Australian woman had a terrifying experience over the weekend when a shark she was feeding pulled her into the water by her finger.

According to CNN’s affiliate 7 News in Australia, Melissa Brunning of Perth was on vacation in a remote area called Dugong Bay when it happened.

She was standing on the back of a boat, feeding fish to a group of tawny nurse sharks when suddenly, she was dragged into the water. The moment was caught on camera.

“It happened so quickly. All I could really focus on was the fact that my finger is gone,”  Brunning said. “He’d clamped on it and it felt like it was shredding off the bone.”

Tawny nurse sharks are normally calm, according to 7 News, but have powerful jaws and multiple rows of teeth. They will bite to defend themselves if they feel threatened.

After she was pulled back onto the boat, the 34-year-old found out her finger was still attached. She says she didn’t immediately go to the hospital because she was in such a remote area and hoped her finger would heal.

But the wound ended up getting so infected that she needed to have an operation when she got home to have it cleaned. X-rays determined she also had fractured a bone and torn a ligament.

Brunning admitted to 7 News that she was wrong to be feeding the sharks that day. She wants others to know it’s safer to admire them from inside a boat.

“Just be mindful of your surroundings and don’t feed sharks,” she said.