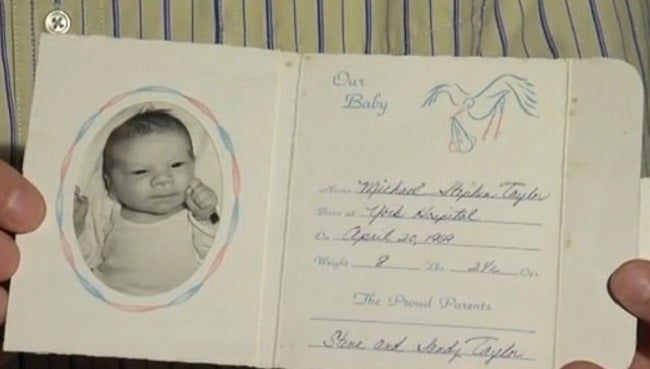 LANCASTER, Pa. (WHTM) – A Lancaster County woman recently bought a baby photo taken more than four decades ago, and she used social media to track down the person in the picture.

“We just put it on Facebook on a whim,” Kay Gildea said with a shrug.

The baby photo Kay Gildea found at a Lancaster County flea market got more than your typical Facebook baby picture attention. Before long the post hit more than 78,000 shares.

She thought it was a long shot, but she was hoping to find the person in the picture.

“When we found it, we were going through all kinds of, ‘Where is this guy now? Is he alive? is he dead?'” Gildea said.

Turns out, he’s very much alive – and working for WHTM-TV. Mike Taylor is an information technology engineer – the go-to fix it guy. He usually just uses Facebook to share pictures of his 3-year-old daughter. But just 36 hours after Gildea’s post, he made a discovery.

“I took a look at it and I thought, ‘Oh that’s cute someone found someone’s baby picture,'” Taylor said. “And then I read it, it took a minute to sink in but that’s my name, my birthday, my parents and I was like, ‘That’s me!’ I couldn’t believe it.”

Taylor messaged Kay, and she mailed him the picture. To Taylor, this is more than a keepsake.

“I don’t have a lot of pictures of myself as a baby or a child growing up,” Taylor said. “And I don’t really have anything to share with my daughter, who’s 3 now. So it’s nice. She loves baby pictures, so it’s nice to have some of that family stuff back.”

Taylor accompanied  WHTM-TV during an interview with Gildea so he could thank her in person. Taylor discovered that she had two photos of his grandmother, who he recognized instantly.

“I’m curious to see what else is out there,” Taylor said. “There’s probably a box of my stuff somewhere, so I’d like to see what I can find.”

“Some things are really valuable, and if you can return them, try to,” Gildea said. “It was just something as simple as a picture but it turned into this huge thing and I’m really excited about it.”