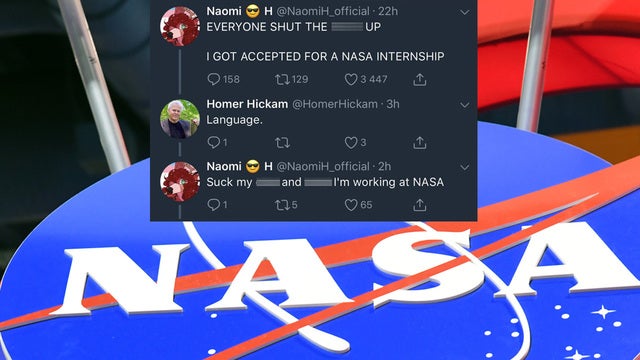 (WCMH) – A woman’s excitement over an internship may have gotten the better of her.

A woman, identified only as Naomi H, using harsh language, shared on Twitter that NASA had accepted her for an internship. Former NASA engineer and ‘October Sky’ author Homer Hickam replied to her tweet, saying, “language.”

Hickam replied, “And I am on the National Space Council that oversees NASA.”

Hickam is one of more than two dozen people named to the newly-created National Space Council Users Advisory Group.

Word eventually came out that Naomi had lost her internship. The response from Twitter users was mixed.

This is a normal practice, I don’t feel bad for someone who told off their boss publicly, she should be more careful— jacob gales (@JacobScott615) August 21, 2018

Welcome to the Internet, where your entire life is public and recorded and you have no personal life. If you want a professional job, then you act professionally.— You (@Vorchitect) August 21, 2018

Hickam later wrote about the incident on his blog, saying he had nothing to do with her getting fired.

“I’m a Vietnam vet and not at all offended by the F-word. However, when I saw NASA and the word used together, it occurred to me that this young person might get in trouble if NASA saw it so I tweeted to her one word: “Language” and intended to leave it at that.

Soon, her friends took umbrage and said a lot of unkind things but long after I was gone as I immediately deleted my comments and blocked all concerned.

Later, I learned she had lost her offer for an internship with NASA. This I had nothing to do with nor could I since I do not hire and fire at the agency or have any say on employment whatsoever.

As it turned out, it was due to the NASA hashtag her friends used that called the agency’s attention to it long after my comments were gone.”

Naomi eventually reached out and apologized to Hickam. After the conversation, Hickam had kind words to say about Naomi. He also said he would help her find a better position.

She reached out to me with an unnecessary apology which I heartily accepted and returned with my own. After talking to her, I am certain she deserves a position in the aerospace industry and I’m doing all I can to secure her one that will be better than she lost. I have also talked to the folks that had to do with her internship and made absolutely certain that there will be no black mark on her record.