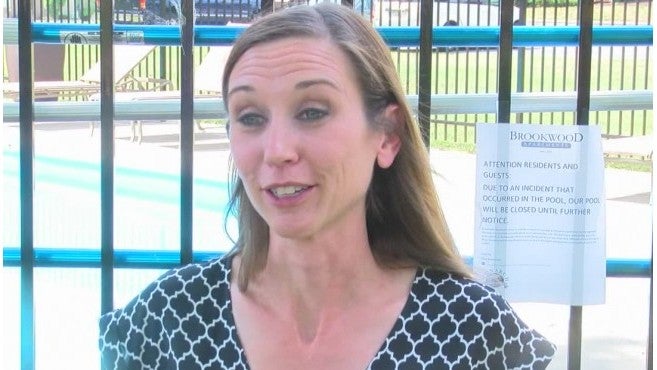 INDIANAPOLIS (WISH) — An employee at an Indianapolis apartment complex has been hailed a hero for saving a toddler and a pregnant woman from nearly drowning.

The woman was submerged in a pool, and the toddler barely hung on above the surface.

She was by the Brookwood Apartments community pool when she saw a toddler alone in the pool barely hanging onto a raft.

“I’m just running at this point, and I’m literally throwing my coat off, dropping my phone and keys,” Potter recalled.

Without thinking twice, the assistant manager at the complex dove into the pool.

“It felt like forever to get to the side of the pool,” said Potter.

When she reached the toddler, her work was just beginning. An Indianapolis Fire Department report said the boy’s mother, six months pregnant, tried to save her toddler son.

As she was underwater and unconscious, she still managed to hold the toddler above water.

“I was definitely a little panicked at that point; I don’t know if i can get both of them,” Potter said.

Every second counts when a person is submerged. Potter grabbed the life raft, dragging the toddler to safety, as adrenaline took over.

“Someone was watching out for us. That’s all I can really say,” she said.

Somehow, kicking and swimming with one arm, Potter swam with the still-submerged pregnant mother.

“I couldn’t lift her head up and keep him above water as well,” said Potter.

Another employee helped get everyone out of the water. That’s when they called 911.

At first, the mother was not breathing, but quickly there was a pulse. Authorities expect the mother and toddler to recover.

“Everybody keeps telling me I’m a hero, and I say I hope any other person would do the same thing,” she said.

Potter had a chance to speak with the woman she saved, who thanked her before heading to the hospital.

Authorities did not provide information about the toddler’s condition.