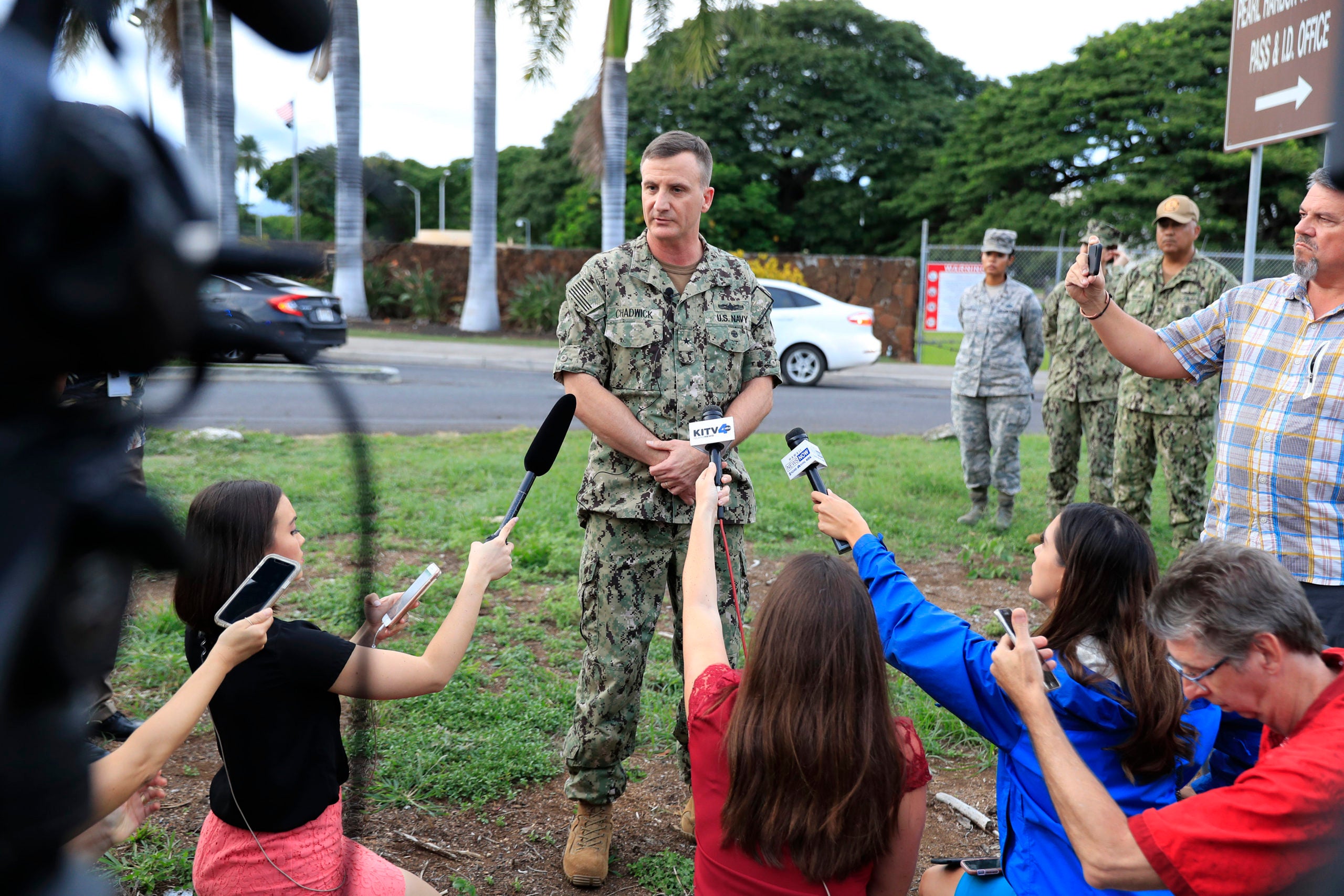 HONOLULU (AP) — A U.S. sailor shot three civilians, killing two of them, before taking his own life at Pearl Harbor, just days before thousands descend on the storied military base to mark the 78th anniversary of the Japanese bombing that propelled the United States into World War II.

Rear Adm. Robert Chadwick, commander of Navy Region Hawaii, said the military would evaluate whether security should be upgraded before the annual ceremony Saturday. About a dozen survivors of the 1941 bombing were expected to attend, along with dignitaries and service members.

The shooter was identified Thursday as 22-year-old G. Romero, according to a military official who spoke on condition of anonymity to provide details that had not been made public.

Chadwick said he didn’t know the motive for the shooting Wednesday at the naval shipyard within Joint Base Pearl Harbor-Hickam. The wounded victim was hospitalized in stable condition.

It wasn’t known if the sailor and the three men working for the U.S. Department of Defense knew each other, Chadwick said.

“We have no indication yet whether they were targeted or if it was a random shooting,” Chadwick said.

Tara Kapoi told The Associated Press that her 30-year-old husband, Vincent Kapoi Jr., was one of those killed. She said he worked at the shipyard and grew up in Waianae, a town on the west side of Oahu.

“We don’t know what happened,” she said Thursday, asking for privacy.

Names of the other victims have not been released.

The sailor who opened fire was assigned to the fast attack submarine USS Columbia, which is at the base for maintenance.

It wasn’t immediately known what type of weapon he used or how many shots were fired. Chadwick said that was part of the investigation. Personal weapons are not allowed on base.

Mass shootings and gun violence are rare in Hawaii. It had the lowest gun death rate among the states in 2017, according to the Giffords Law Center to Prevent Gun Violence. The islands have strict firearms laws, including a ban on assault weapons and large-capacity ammunition magazines.

In 1999, a Xerox service technician shot and killed seven coworkers in Hawaii. In 2006, a man fatally shot his taxi driver and a couple taking photos of the city lights from a lookout point in the hills above Honolulu.

Hawaii Gov. David Ige said the White House has offered assistance from federal agencies and that the state is also ready to help if needed.

“I join in solidarity with the people of Hawaii as we express our heartbreak over this tragedy and concern for those affected by the shooting,” Ige said in a statement.

The Pearl Harbor Naval Shipyard repairs, maintains and modernizes the ships and submarines of the U.S. Pacific Fleet, which is headquartered at Pearl Harbor. The base is the home port for 10 destroyers and 15 submarines. It also hosts Air Force units.

The shipyard is across the harbor from the wreckage of USS Arizona, which sank in the Dec. 7, 1941, Japanese attack. It’s also across from the visitors center, which will host Saturday’s ceremony. More than 2,300 Americans were killed in the bombing.

The shipyard has played a key role in naval history, most notably during World War II. Shipyard workers were given just days to repair the USS Yorktown, an aircraft carrier severely damaged during the Battle of the Coral Seat in 1942, because the Navy needed to quickly send the ship to Midway to meet Japanese forces.

Some 1,400 shipyard workers labored around the clock for almost 72 hours to patch together the carrier. The planes the Yorktown delivered to Midway sank one of the four aircraft carriers Japan sent to the battle and helped destroy two others. The Battle of Midway turned the tide of the war in U.S. favor.