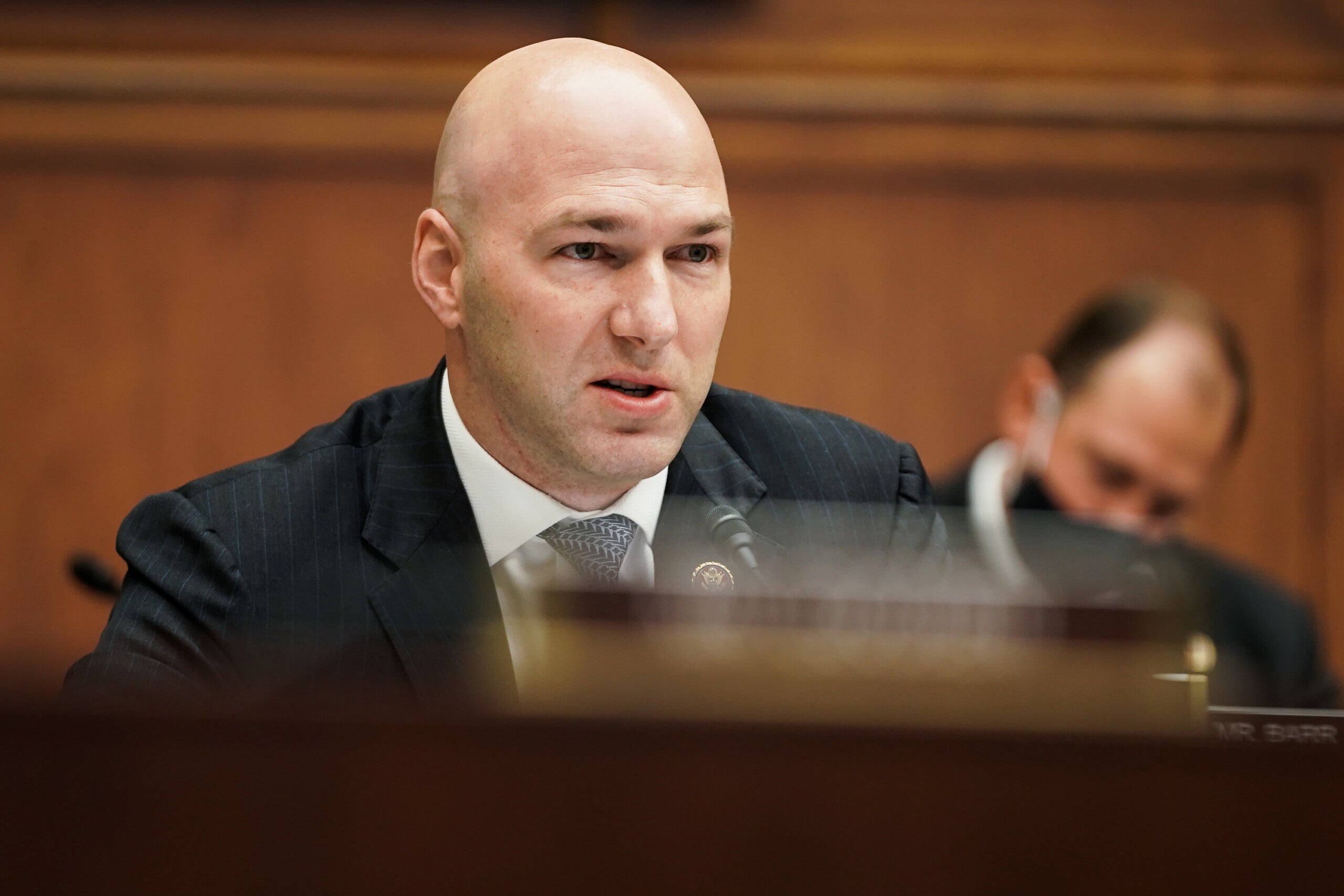 (CNN) — To Shannon Burns, the betrayal that local Republicans felt when Ohio State wide receiver-turned-Republican-congressman Anthony Gonzalez voted to impeach then-President Donald Trump was analogous to only one other disloyalty: Suiting up for Michigan.

“This is like him playing for the Buckeyes again, getting down to the two-minute warning, running into the locker room, getting a Michigan jersey and running back out,” said Burns, who runs the Strongsville GOP, a grassroots organization that once backed Gonzalez. “It’s not that you turned your back or you did something that we didn’t like. You did the unthinkable.”

Gonzalez’s decision to join just nine other House Republicans and all House Democrats to impeach Trump in January has unearthed profound anger in his northeast Ohio district, kicking off a localized fight over the future of the Republican Party that pits the two-term congressman against irate constituents eager to expel any Republican who crosses the former President.

Numerous county parties have either censured or publicly decried him, grassroots organizations once aligned with the congressman have taken back their endorsements and fellow Republican have begun lining up to oust him in a primary.

“He’s a traitor,” said Mike Ryan, a 50-year-old Republican who voted for Gonzalez in 2020 but now wants to see him ousted from office.

Gonzalez, who easily won reelection in 2020 after first winning the seat in 2018, has remained defiant in the face of criticism, telling local outlets that he does not regret the vote and is willing to lose his seat over the decision.

“I’m all about forgiveness,” said Ryan. “But when you sit there, and you say you didn’t make a mistake … that calls into question how you are going to represent me.”

The firestorm is just the latest example of a broader fight going on inside a Republican Party that is struggling to chart its course in the wake of Trump’s 2020 loss. Some Republicans — typified by Senate Minority Leader Mitch McConnell and other national figures — are eager to move on from Trump and his caustic politics. Those efforts are running headfirst into the party’s Trump-loyal base, one that believes the path forward for Republicans is total loyalty to Trump.

It’s clear on the ground here in Gonzalez’s district that the Trump Republicans are winning this fight. And Gonzalez could bear the brunt.

Gonzalez, who declined an interview with CNN, has argued that Trump’s rhetoric at the “Stop the Steal” rally ahead of the January 6 insurrection at the US Capitol and the fact that Trump did little to stop those actions swayed him to back the impeachment charges.

Top party officials tell CNN that Gonzalez could lose his seat over that decision with a number of candidates actively considering a primary challenge. One Republican candidate, Jonah Schulz, has already declared a bid.

“Every member has to make their own decisions for their own reasons,” said Jim Renacci, the Republican who previously held Gonzalez’s congressional seat. “One good thing is most people only have a 30 days memory when it comes to politics. … Does he have an issue today? Of course he does.”

The reaction to Gonzalez’s impeachment vote in January was swift.

Phones at local county offices across his snow-covered district began ringing constantly, with local Republicans eager to voice their disapproval. Republican officials in Medina said their office, which usually fields no more than 10 constituent calls a day, was getting six times that for weeks.

“It blindsided us,” said Lisa Woods, a Medina County Republican who runs a local grassroots organization.

Facebook groups dedicated to Republican politics in Northeast Ohio began lighting up with demands that Gonzalez resign his seat. And groups ranging from official county parties to grassroots organizations quickly began the process of censuring the Republican lawmaker.

Some top Republicans have even begun whispering that state Republicans could use the 2022 redistricting process, where Ohio is expected to lose a congressional district, to exact revenge on the congressman, effectively drawing him out of his district or making it much harder for him to get back to Congress.

Charlie Selzer, the 78-year-old owner of River Styx Market, said he was “surprised” that his congressman had crossed Trump, considering he voted for the lawmaker in November.

Selzer, through the market he has owned since 1982, has become one of the biggest purveyors of Trump memorabilia in Northeast Ohio, selling almost anything you could think of with the Trump name emblazoned on it, including Trump flags that tout his possible 2024 run. He was unambiguous when asked whether Gonzalez should keep his job.

“He’s like all the rest of them who voted for impeachment, I think they are going to find themselves out of a job in a couple years,” said Selzer, making clear that if he is forced to choose between someone like Gonzalez and Trump, he will go with the latter every time.

The path that brought Gonzalez to this inflection point is unlike most lawmakers.

Gonzalez initially made a name of himself as standout high school athlete in Cleveland, building on that recognition when he decided to play football at Ohio State. After three solid years as a Buckeye, Gonzalez was drafted by the Indianapolis Colts in the first round of the 2007 NFL Draft, a selection that paired him with Hall of Fame quarterback Peyton Manning. Injuries cut Gonzalez’s time in the NFL short, forcing him to retire after five seasons.

But that time in the league was central to the pitch he made voters when he decided to run to represent Ohio’s 16th Congressional District in the House in 2018 after Renacci opted to unsuccessfully challenge incumbent Democratic Sen. Sherrod Brown. Gonzalez had to beat Christina Hagan, a local lawmaker and Trump devotee, in the primary, earning the reputation as an establishment candidate. But since getting to Congress in 2019, local Republicans have been enthused with how in-line Gonzalez has been with Trump.

That loyalty to Trump’s agenda had won over local Republicans — and made the sting of his decision to impeach the GOP President even harsher in the eyes of people like Burns.

The local Republican activist said he was told beforehand that Gonzalez planned to impeach Trump. Burns began working the phones and eventually spoke with the congressman’s chief of staff, imploring him to change his mind.

“It was a terrible surprise,” Burns said. He called for a meeting of his group earlier this month to decide what to do about Gonzalez. There were 110 Republicans in the room, Burns recalled, when a resolution was brought forward that condemned the impeachment vote and called on the congressman to resign.

“I’ve been involved in Republican politics in this area for 20 years or more and I have never seen a circumstance when you have 110 members together and they all agree on a topic,” Burns said.

Asked what the vote tells him about the future of the party and Gonzalez’s role in it, the local Republican added, “He is of the delusional mindset that he can run for reelection again and win a primary.”

The question now before Gonzalez is whether forgiveness is possible in politics.

The congressman’s district is varied — it snakes from the suburbs of Cleveland on the shores of Lake Erie, down the Cuyahoga Valley into suburban communities like Strongsville and Medina and into more rural areas southwest of Akron like Wooster and Wayne County. It’s is a mix of planned suburban communities, undulating snowy covered hills and family farms.

And the area has long been solidly Republican. Gonzalez easily won the district in 2020 with more than 63% of the vote.

“We are blood red here and we like it that way,” said Doug Deeken, the chair of the Wayne County Republican Party. Gonzalez represents the entire county.

Unlike some of his Republican colleagues, Deeken, a mild-mannered leader, is more charitable to the Republican congressman, even though his county party censured him in stark terms.

“I still like Anthony Gonzalez and I still think, on balance, he has done a pretty good job,” Deeken said, recalling the “shock” he felt when he heard the congressman was voting to impeach. “But he made a big mistake and he needed to be told he made a mistake. We think he screwed up, so we told him.”

But Gonzalez, as multiple Republicans noted, opted to buck the party at a politically expedient time — just days after the 117th Congress began and months before any primary could come together. As Deeken put it, the congressman undoubtedly complicated his future, but “a day is an eternity in politics and there are a lot of eternities between now and when he is up for reelection.”

The looming factor in this possible redemption is Trump. The former President has made clear he wants to play a role in the 2022 midterms. And aides close to Trump have hinted that he may look to punish those Republicans who voted to impeach him — a scenario that is not lost on leaders like Deeken.

“A year from now when the filing deadline comes, who is going to remember? It could be a lot of people and it could be people who have long memories.”

With a shrug, the county party chair added, “And it could be that the former President will personally come here and remind voters. That is not impossible.”