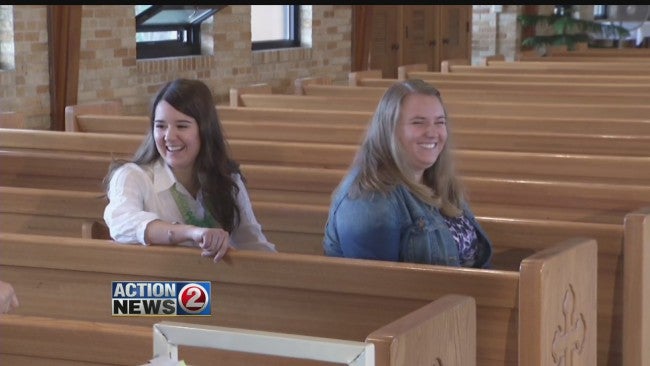 GREEN BAY, Wisc. (WBAY) – They are all young Catholics, and they all feel a connection to Pope Francis.

“Really interested in the youth right now, and that’s what I like about him and the way he gives his speech to us, to go out there and let everybody know there’s youth out there that’s ready to know about Christ and not just stay in their comfort zone, to be more out there,” Hector Nieto, a student at UW-Oshkosh, said.

During the two years Pope Francis has led the Roman Catholic Church, these young Christians say they’ve drawn to his uplifting spirit.

“A man of joy, and I think that’s what attracts people to him. He lives out his Christian faith on a daily basis, he shares the gospel message on a daily basis, and when you see him interact with people, whether it’s a large crowd or one-on-one as an individual you can tell that, and I think that is what really brings people to him, why people gravitate to him,” Alex Solsma, a WHBY radio sports broadcaster, said.

Nowhere has the pope made more strides to connect with young people than on social media.

“You’ll be on Twitter and someone will post a selfie they took with the pope,” Sarah Bradford, who works in Communications in the diocese. “I mean, that is completely new territory. But for him to recognize that’s how young people are communicating and that’s how they are getting to know one another, that he’s willing to step into that, it probably makes him really uncomfortable or to try new things, but for him to be so fearless and to enter into the lives of young people has been really awesome.”

While none of them will be in Philadelphia this weekend to see the pope is person, they will be watching here at home, expecting to hear a message filled with authenticity.

“He is always himself, whether it’s his humility or his humor and his love and his mercy that he shows for others, and I think in that authenticity he personally challenges me to make sure I’m actually walking the talk. It’s one thing to talk about being Christian, being Catholic, but to actually put into action the belief and teachings of our faith, that’s what he’s doing,” Oshkosh youth ministry coordinator Tommy Nelson said.