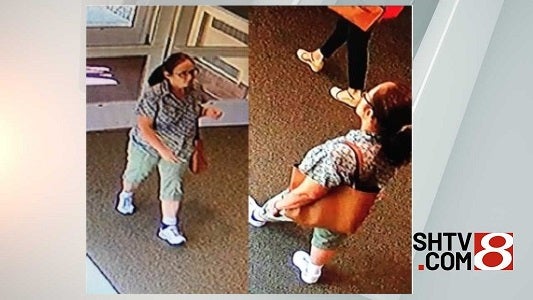 ZIONSVILLE, Ind. (WISH) — Zionsville police have released photos of a person of interest in their investigation of a fake bomb left at a church on Sunday.

Police said the package was a grocery bag with a jar inside. Inside that jar was liquid, wires and a cellphone wrapped in newspaper. It looked very convincing, but ISP’s bomb squad ran tests and determined it was not dangerous, Zionsville police said.

“Whoever made it was doing one thing and one thing only, was trying to put fear in everybody to make it look like a bomb,” said Zionsville Police Sgt. Brad Kiefer.

People at the church said a woman who had been acting suspiciously and wandering around the church left the package on top of a refrigerator, stayed for the whole church service and then left.

A Monday afternoon post on the Zionsville Police Facebook page said the FBI and the Bureau Of Alcohol, Tobacco, Firearms and Explosives was involved in the investigation.