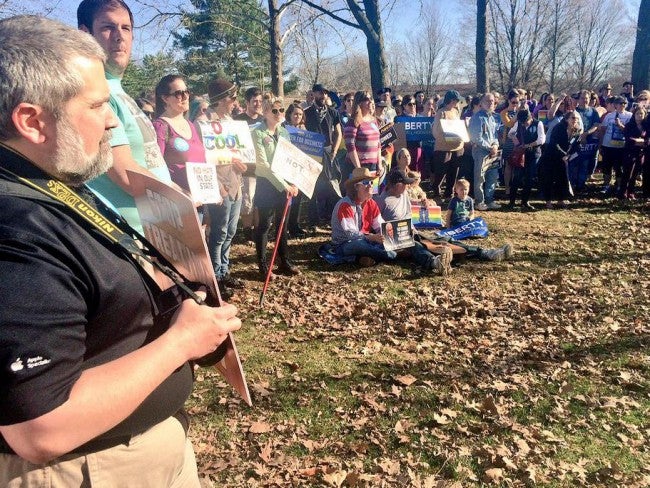 They wanted to make sure their voices are heard in the coming days as changes are in the works for the law. This particular gathering came out of frustration for Chris Wilson, when trying to reach out to Governor Mike Pence.

“I called and couldn’t get through on the phone lines all I could do was post on his Facebook page,” she said.

Pence had a scheduled appearance in Bloomington Tuesday, so Wilson organized a small rally.

“At four o’clock Monday we found out he wasn’t coming so we decided to do it anyways because everyone wanted their voices heard,” Wilson said.

Pence ended up sending Attorney General Greg Zoeller in his place. As a surprise guest, he spoke to the crowd.

“I think your ability to speak out not just about the one bill, but about other issues that are important is part of the same protections and freedoms that I stand for every day,” Zoeller said.

He listened to the messages of those like Elizabeth Sparks.

“I don’t think that the law represents what the majority of Indiana residents want,” Sparks said.

Others say she is not the only one who feels this way.

“We wanted Governor Pence to know that a lot of people feel this way,” Wilson said.

Zoeller thanked the crowed and said he would share what they said.

“I’ll take your message back with me to the state house and thank you for at least giving me the ability to speak,” Zoeller said.

Zoeller also spoke about last year’s gay marriage battle in Indiana, saying that regardless of a person’s position on the issue, it’s something that is now legal in the state. That got a loud round of applause from the crowd in Bloomington.