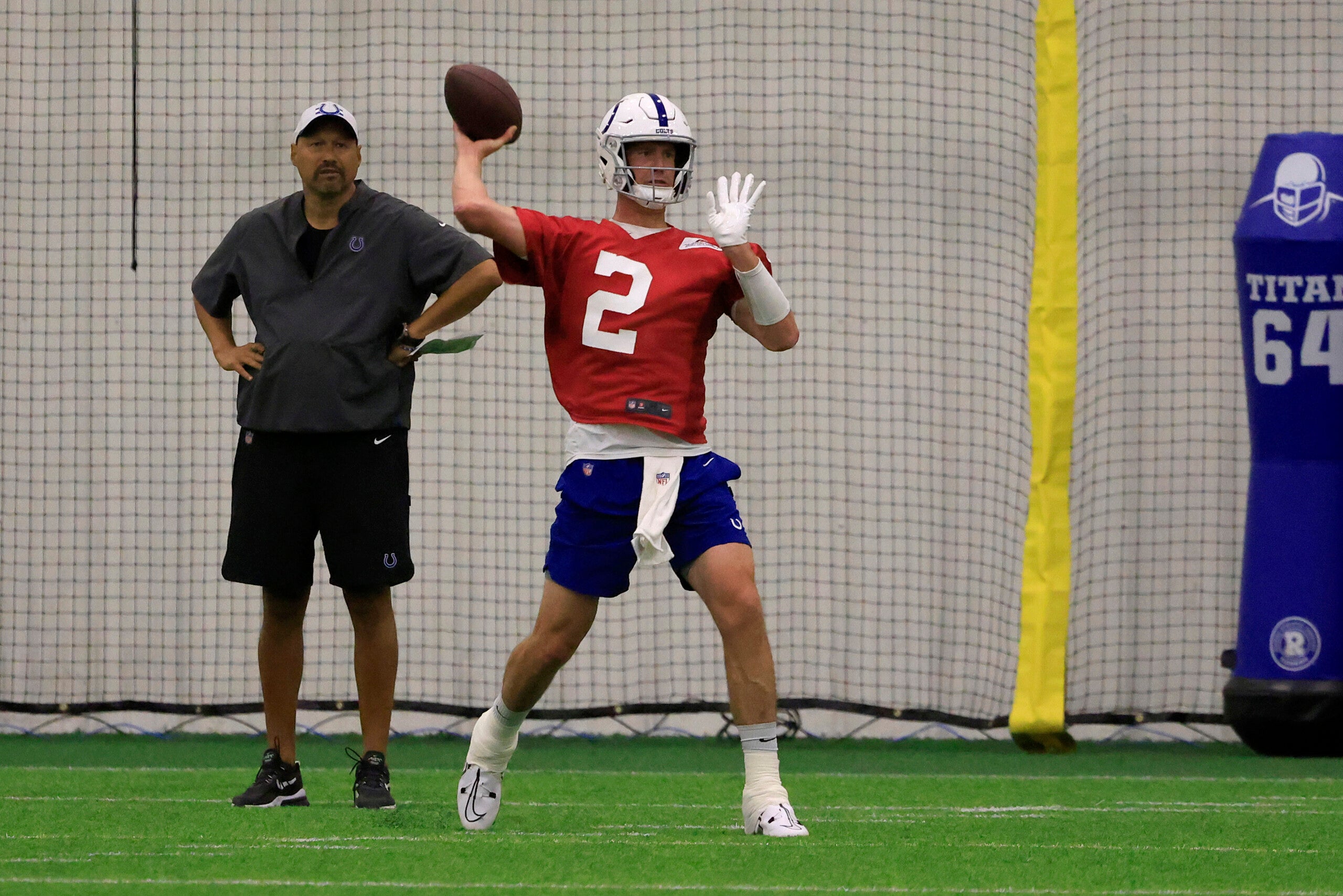 WESTFIELD, Ind. (WISH) — On Wednesday, new Colts quarterback Matt Ryan debuted at training camp in front of a crowd of 750 fans who waited for hours in the rain to grab a seat inside at the Grand Park Sports Complex in Westfield, Indiana.

Frank Reich’s team practiced for an hour and twenty minutes with no new injuries to report, and notably off the field, all-pro linebacker Shaquille Leonard energetically coaching up the defense as his training camp absence begins following back surgery in early June.

Here are the five top takeaways from day one of practice:

Matt Ryan opened Wednesday with a mistake. Rookie safety Nick Cross, selected in the second round out of Maryland, made the top play of the day, intercepting Ryan on an acrobatic, diving grab over the middle of the field. However, the remainder of Ryan’s afternoon was nearly mistake-free, connecting on multiple occasions with Michael Pittman Jr., rookie wide receiver Alec Pierce, and running back Nyheim Hines.

Frank Reich believes the offense is ahead of schedule compared to this point one season ago, and credits Ryan’s decisive nature in the pocket as the major reason for the improvement.

“There’s a real decisiveness with Matt (Ryan), and he’s just been around the block enough to know,” Reich said. “He doesn’t pass one up (open wide receiver) to wait for somebody to open up down the field. When he’s seeing that underneath guy open, he’s just played enough ball to know the value of taking those and then taking those shots down the field when they are there.”

When asked how he leads an offense, Ryan delivered Wednesday’s most comical moment post-practice with this blunt assessment of his approach.

“Keep a foot up their (expletive), you know, just when they need it (laughs),” Ryan said. “Sometimes it’s letting guys know that we need better, sometimes it’s a little love too. Each guy is different, each day is different, but the beauty of experience is you kind of know when it’s not right. You have that sense of when things are right. The thing I’ve learned is that you need to nip that in the bud as soon as possible and you need to get it back to where it needs to be. I try and do the best that I can do, we also have a great coaching staff too, guys that have great experience and understand what it looks like at the highest level and that’s going to help us.”

The biggest takeaway with this unit is rookie Nick Cross taking the majority of first-team reps at strong safety. Outside of Cross’s stellar interception early, key pieces in the Colts’ secondary put together a nice opening practice. The second best play came courtesy of third-year safety Julian Blackmon, who was a full participant on Wednesday, completing his comeback from a season-ending Achilles injury in 2021.

Blackmon’s recovery has been remarkable, and his explosive playmaking ability was again on display on day one. Elsewhere in the secondary, the two outside starting safeties, on Wednesday, were free agent addition five-time Pro-Bowler Stephon Gilmore and fellow-free agent pickup Brandon Facyson.

It was no surprise to see running back Nyheim Hines frequently featured as a wide receiver to open training camp. Following taking a step back this past season, Reich and the offensive coaching staff continue to shift the speedster’s role in the passing game. On Wednesday, Hines was featured at wide receiver in the slot position, hauling in a handful of receptions from Ryan, while running with the starting offense.

In addition to Hines’s evolution, rookie wide receiver Alec Pierce going over the middle for a 25-yard catch goes down as one of the top offensive plays to open camp.

You can bank on this being a very long summer for the Colts’ left tackles. It’s not necessarily an early knock on presumed starting left tackle Matt Pryor, but, Ngakoue simply had his way during portions of the 11-on -11 work on Wednesday. Now in his third different stop (Jacksonville, Las Vegas) alongside the Colts’ new defensive coordinator Gus Bradley, the veteran edge-rusher’s top moment, Wednesday, came with what would have gone down as an easy sack on Matt Ryan under normal game conditions.

Behind Pryor at left tackle was fourth-round pick Bernard Raimann, who is currently handling the left tackle duties with second-team offense.

One of the more notable moments post-practice came when Reich went out of his way to praise future Hall-of-Fame wide receiver Reggie Wayne for his early coaching tenure back home in Indianapolis. With the uncertainty surrounding the wide receiver and tight end positions, Reich believes Wayne is already giving both units a jolt this summer.

“Reggie’s (Wayne) done a phenomenal job with these guys,” Reich said. “I mean Reggie, you talk about ‘it’ factor, Reggie has brought an ‘it’ factor to that room that I think is going to really help those young guys take a good step.”

Third-string running back Deon Jackson fumbled twice Wednesday to open his competition with recent veteran free agent addition Phillip Lindsay in what is expected to be the third and final running back spot this season.

Here were the starting offensive and defensive units on day one: