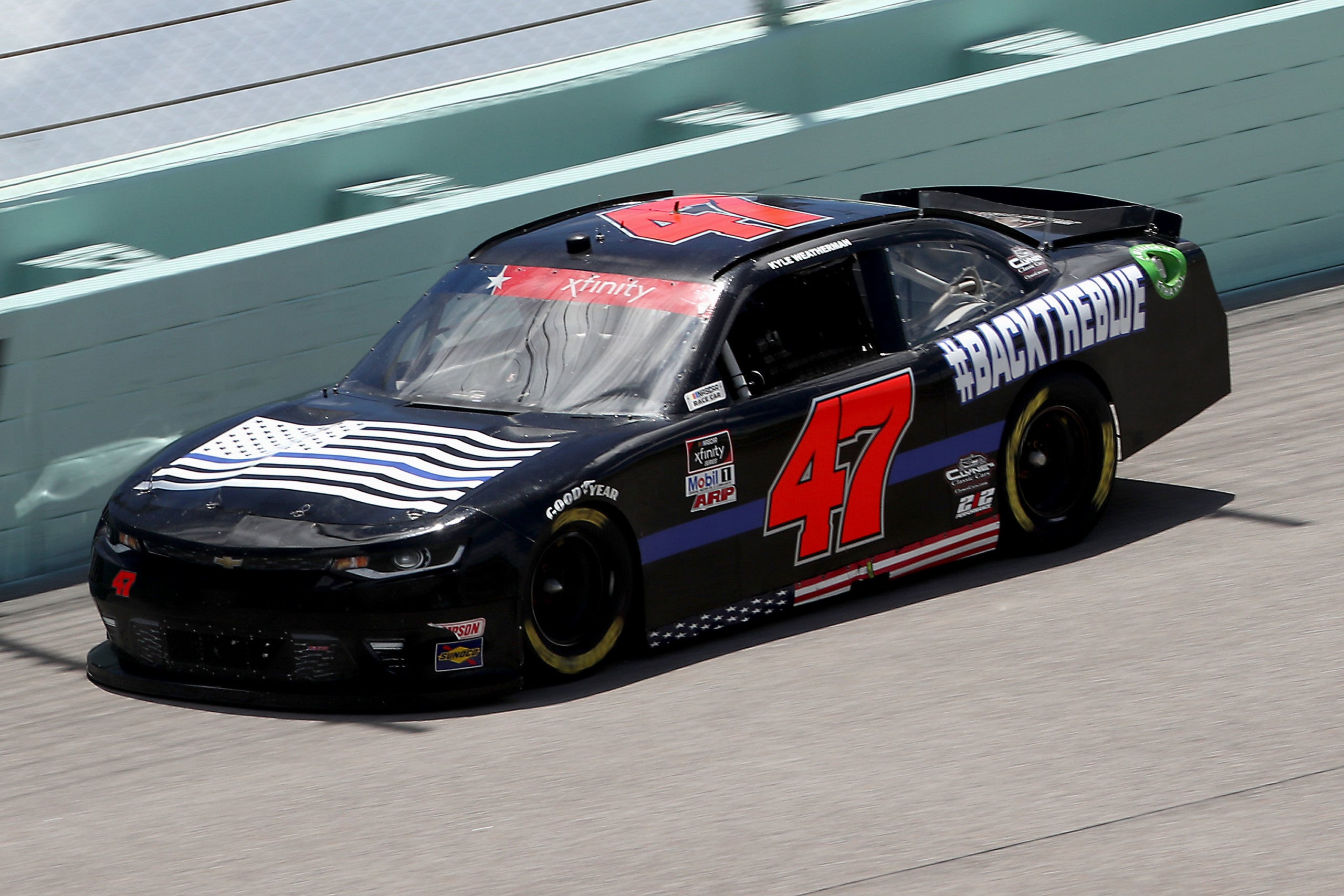 (CNN) — Days after NASCAR’s only full-time black driver raced in a Black Lives Matter-themed car, a competitor drove with a symbol of Blue Lives Matter on its hood.

At Sunday’s NASCAR Xfinity race in Homestead, Florida, driver Kyle Weatherman debuted a newly designed car emblazoned with the hashtag “Back the Blue” in support of police and first responders.

The hood of Weatherman’s Camaro bore the Thin Blue Line flag, an emblem of the Blue Lives Matter organization, a national group of police and their supporters originally formed to counter the Black Lives Matter movement.

The Thin Blue Line flag resembles an American flag but in black and white, with one blue stripe in the middle. The blue line is meant to symbolize law enforcement. The space above the blue line represents societal order, and the space below the line is meant to be crime and chaos. The “thin blue line” of law enforcement separates the two, according to Thin Blue Line USA, which makes pro-police clothing and gifts that support police nonprofits.

“A lot going on in the world right now and I wanted to express that most first responders are good people,” Weatherman tweeted ahead of the race. “My uncle is a firefighter and he would do anything to help save lives.”

Mike Harmon, who runs Mike Harmon Racing, Weatherman’s team, said since the paint scheme went public, the team has received hundreds of emails from the families of officers killed in the line of duty who appreciate the recognition.

“As far as this week’s paint theme, there’s thousands upon thousands of police officers in this country that serve us very well and they do not deserve to be disrespected and not be appreciated,” Harmon said in a statement to CNN. “We at MHR want to send the message (that the deaths of police officers killed in the line of duty) wasn’t in vain and that they’re not forgotten and very much appreciated.”

June is turning out to be quite eventful for NASCAR.

Just last week, Bubba Wallace, the sport’s only black driver, debuted a Black Lives Matter car, with an image of two fists — one black and one white — gripping each other on the hood and the words “compassion, love, understanding” wrapped around the bumper.

That same week, the sport banned the Confederate flag from events. NASCAR said flying the flag at races “runs contrary to our commitment to providing a welcoming and inclusive environment for all fans, our competitors and our industry.”

That decision wasn’t welcomed by all. At least one driver quit the sport over the decision, and some Southern fans decried it as a violation of their heritage. The Confederate flag continues to be a divisive symbol, though to many it represents the racism of the slave-dependent South before the Civil War.

Wallace competed at Homestead over the weekend, too, and finished 13th in the Cup Series. Weatherman didn’t finish his race.