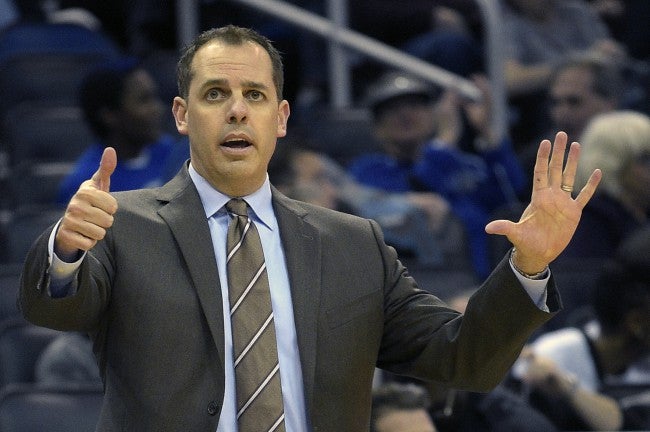 ORLANDO, Fla. (AP) – Close games have usually turned into losses for the Indiana Pacers over the past few weeks.

This time, they put an end to their second-longest losing streak of the season.

David West had 20 points, reserve Damjan Rudez added a career-high 18, and the Pacers snapped a seven-game skid with a 106-99 win over the Orlando Magic on Sunday night.

“It’s been a tough year for all of us, and this isn’t any more than one game. But it certainly feels good, and it’s certainly good to see those guys out there having fun,” Indiana coach Frank Vogel said.

The Pacers trailed by seven entering the fourth quarter, but got 16 points from Rudez in the final 12 minutes. They outscored the Magic 31-17 in the quarter.

George Hill had 17 points and six rebounds for Indiana in just his second game back from a left groin strain.

“Being down in the fourth quarter, it’s easy to lower down your spirit and think we’re going to lose the game,” Rudez said. “But we just hung in there, kept talking on the defensive end, we stayed aggressive. Shots started to drop and we got confidence. Once we took the first lead, we were like, ‘We shouldn’t let this one slip away.'”

It was the ninth straight Orlando opponent to score at least 100 points. The Magic fell to 5-20 this season when their opponent reaches triple digits.

Magic coach Jacque Vaughn said it was an example of his team not finishing the game.

“This is one tonight – hopefully (the team) gets that sense – that you’ve played well for the majority of the game. You put yourself in position to win … the focus needs to be there for 48 minutes,” Vaughn said.

The Pacers took a 95-91 lead on a basket by Ian Mahinmi with less than five minutes to play. But Vucevic made two foul shots to tie it at 97 with 2:23 remaining.

Hill then scored the next four points on a layup and a dunk off a steal. Orlando was trailing 102-99 when Indiana ran down the shot clock and got Rudez free for a 3 from the corner with less 30 seconds remaining.

Vaughn said before the game that he hoped the insertion of rookie Aaron Gordon into the starting lineup for the first time this season would inspire his team to rededicate itself on defense.

A faster start offensively was on Vogel’s wish list.

Neither got what he wanted early on.

Indiana started sluggish, before settling in offensively on their way to a 51-49 halftime lead.

Orlando couldn’t keep the Pacers out of the paint, allowing Indiana to shoot 54 percent (23 of 42) for the half, and 51 percent for the game.

Pacers: Indiana had eight steals and five blocks. …C.J. Miles sat out with a sore left groin. He is day to day.

Magic: Orlando had 22 assists on its 38 field goals. … The Magic had zero offensive rebounds in the first half and three for the game.

Pacers: Host Toronto on Tuesday in the opener of a five-game homestand.

Magic: At Memphis on Monday.