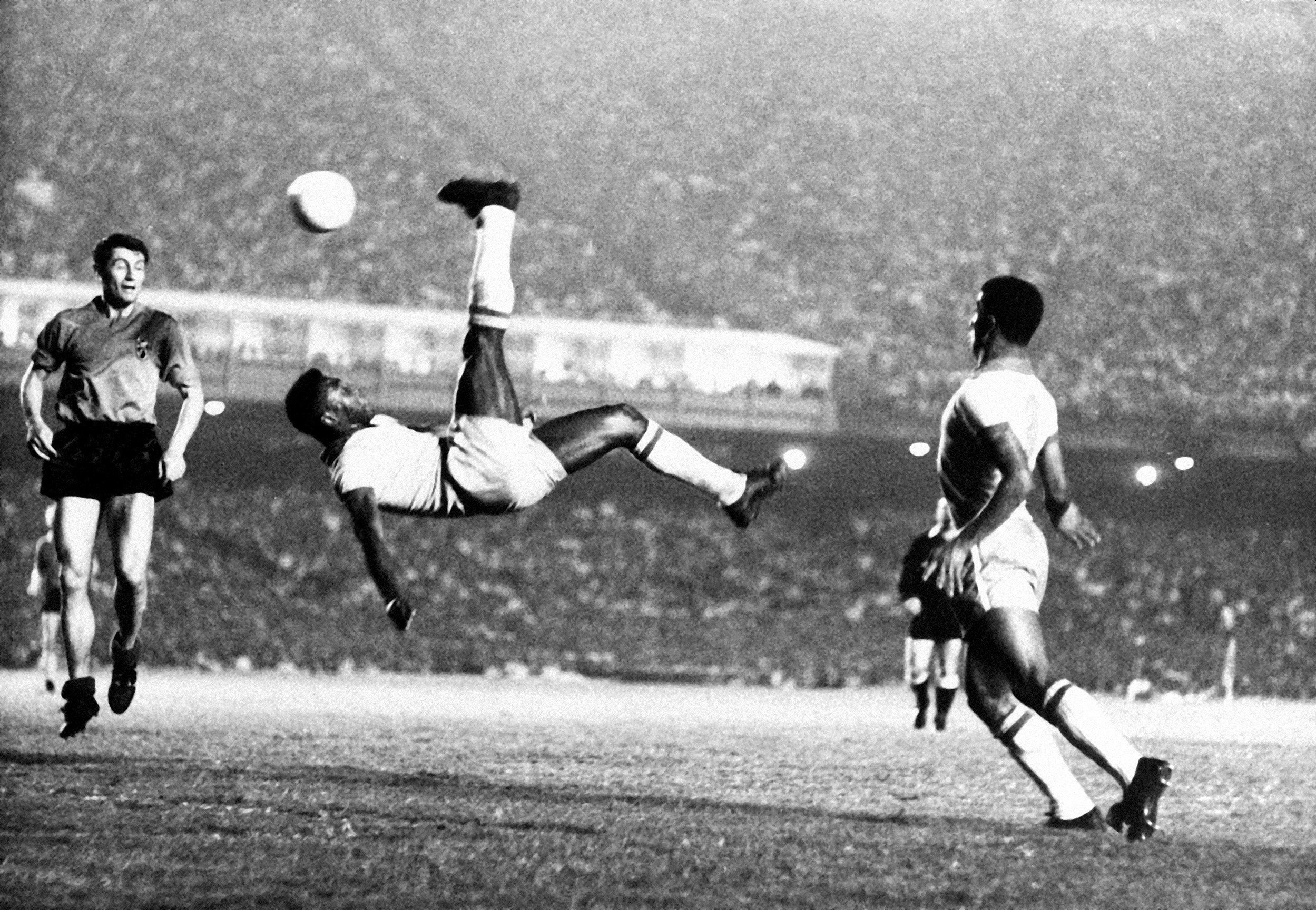 FILE - In this Sept. 1968 file photo, Brazil's Pele kicks the ball during a friendly soccer game against Belgium in Rio de Janeiro, Brazil. On Oct. 23, 2020, the three-time World Cup winner Pelé turns 80 without a proper celebration amid the COVID-19 pandemic as he quarantines in his mansion in the beachfront city of Guarujá, where he has lived since the start of the pandemic. (AP Photo, File)
by: MAURICIO SAVARESE AP Sports Writer
Posted: Oct 22, 2020 / 07:46 AM EST / Updated: Oct 22, 2020 / 07:46 AM EST

SAO PAULO (AP) — Brazilian soccer great Pelé turns 80 on Friday, but the celebration will have to wait.

The three-time World Cup winner will spend the day isolated with a few family members outside Sao Paulo, where he is expected to receive a flood of tributes from players, fans, celebrities and politicians.

His long-time spokesman, Pepito Fornos, said Pelé will likely spend his birthday at his mansion in the beachfront city of Guarujá, on the coast of Sao Paulo state, where he has been since the beginning of the COVID-19 pandemic. He also has residences in Santos and Sao Paulo.

“He will only stay with his family. No party at all,” Fornos told The Associated Press. “That has been the case all his life.”

Fornos said Pelé isn’t speaking publicly because he is still mourning his brother Jair, who died of cancer in March.

Pelé is Brazil’s all-time leading scorer with 77 goals, although Neymar is closing in on that record with 64. But the Paris Saint-Germain striker trails far behind when it comes to World Cup titles, which Pelé won in 1958, 1962 and 1970.

No other player has accomplished that feat.

Pelé also collected a slew of trophies for Brazilian club Santos from 1956-74, including 10 Sao Paulo state league titles, which was a top tournament at the time, six Brazilian championships, two Copa Libertadores titles and the Intercontinental Cup in 1962 and 1963.

The Brazilian ended his career with the New York Cosmos, where he played from 1975-77, winning one national title and attracting sports greats like boxer Muhammad Ali to watch him play as soccer took root in the United States.

Pelé was also Brazil’s sports minister from 1995-98. Two years later, he shared the FIFA award for player of the century with Argentina great Diego Maradona. The Brazilian received the most votes from members of the soccer body, while the Argentine prevailed in an online vote.

Since 1992, Pelé has done charity work as a U.N goodwill ambassador. He stopped his career as a businessman in 2004 after failed attempts in the sports marketing field.

The soccer great has had mobility problems since a failed hip replacement surgery in 2012. He has been forced to use walkers and wheelchairs in public. He has also been admitted to hospitals in recent years for kidney and prostate procedures.

The celebrations in Brazil for Pelé began on Feb. 20, but he didn’t attend the unveiling of a lifesize statue of him at Maracanã Stadium in Rio de Janeiro that day.

That was also part of the 50th anniversary celebrations of Brazil’s 1970 World Cup triumph, which was for many the greatest moment of Pelé’s decorated career.