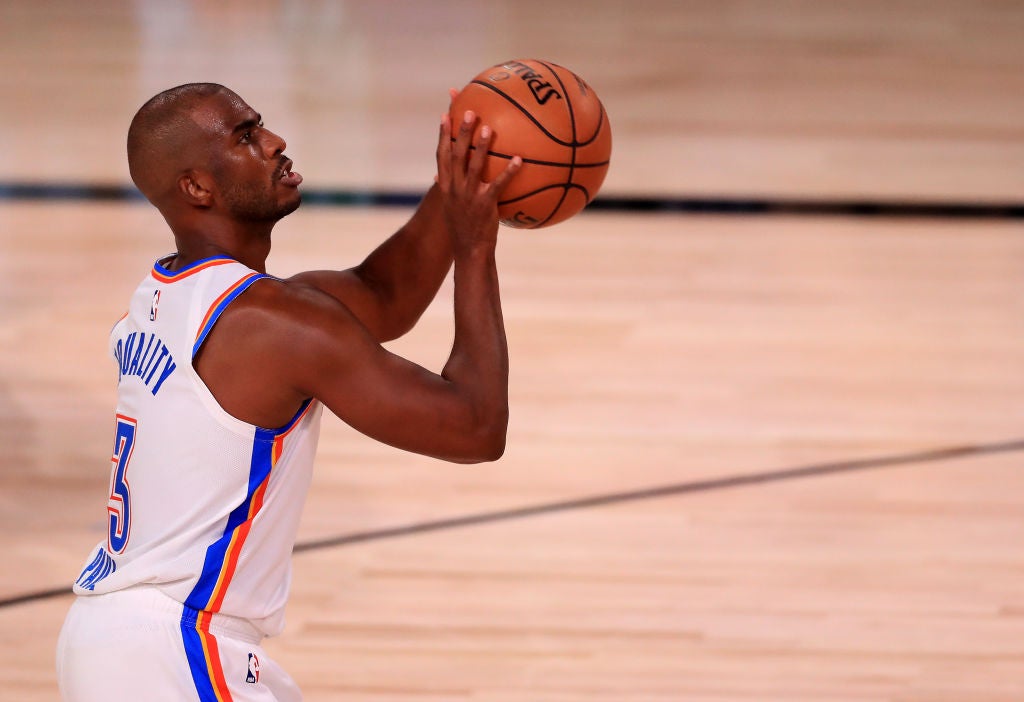 LAKE BUENA VISTA, FLORIDA - SEPTEMBER 02: Chris Paul #3 of the Oklahoma City Thunder shoots the ball during the second quarter against the Houston Rockets in Game Seven of the Western Conference First Round during the 2020 NBA Playoffs at AdventHealth Arena at ESPN Wide World Of Sports Complex on September 02, 2020 in Lake Buena Vista, Florida. NOTE TO USER: User expressly acknowledges and agrees that, by downloading and or using this photograph, User is consenting to the terms and conditions of the Getty Images License Agreement. (Photo by Mike Ehrmann/Getty Images)
by: Matias Grez, CNN
Posted: Nov 17, 2020 / 05:42 AM EST / Updated: Nov 17, 2020 / 05:42 AM EST

(CNN) — The NBA trade moratorium had been lifted for barely an hour on Monday before the league saw its first blockbuster deal, as the Phoenix Suns acquired 10-time All-Star Chris Paul in a trade with the Oklahoma City Thunder.

Paul’s trade value rocketed during his only season in Oklahoma after guiding the young team to the fifth seed in the Western Conference with a 44-28 record, before losing a narrow first-round play-off series to the Houston Rockets in seven games.

After moving from the Houston Rockets to the Thunder in 2019 as part of the trade that saw Russell Westbrook go in the opposite direction, Paul’s performances in Oklahoma earned him a first All-Star appearance since 2016.

“We want to thank Chris for the contributions he has made to the Thunder and the Oklahoma City community both this season and during his initial tenure in 2005-06 with the Hornets,” General Manager Sam Presti said in a statement.

“Chris has been the consummate leader and has left a tremendous legacy in a short period of time. We wish him and Abdel and their families only the best moving forward.”

The move signals the Suns’ intentions of becoming an immediate play-off contender in the Western Conference, with Paul joining Devin Booker, one of the most exciting young players in the league, in the backcourt.

Phoenix grabbed the early headlines in the NBA’s Disney Bubble by going on an incredible 8-0 run during the seeding games.

Though the team eventually fell short of the play-in game for the eighth and final play-off place, there was a sense of excitement and expectation that the young team could carry that form into the new season.

Elsewhere, the Milwaukee Bucks are doing everything possible to convince back-to-back MVP Giannis Antetokounmpo to sign a new contract by reportedly acquiring Jrue Holiday from the New Orleans Pelicans and Bogdan Bogdanovic from the Sacramento Kings.

Antetokounmpo has until December 21 to sign his five-year supermax contract, with his current deal set to expire at the end of the upcoming season when the 25-year-old will become an unrestricted free agent.

In return for Bogdanovic, the Kings will reportedly receive Donte DiVincenzo, Ersan Ilyasova and DJ Wilson, while the Pelicans will receive Eric Bledsoe, George Hill, three first round picks and two future picks in exchange for Holiday.

Ever since the Bucks’ stunning 4-1 defeat to the Miami Heat in the Eastern Conference semifinals, rumors of a move away from Milwaukee for Antetokounmpo have been circulating, with the Heat touted as the most likely destination. However, the Greek forward has indicated that he will stay with the Bucks.