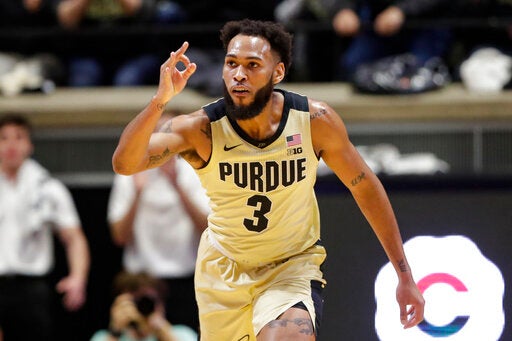 It’s the first time the Boilermakers have beaten a top-five foe from another conference in Mackey Arena’s 52-year history. The Boilermakers (5-3) have won four of five overall.

Jay Huff had 11 points and Mamadi Diakite finished with 10 for the defending national champions. But the Cavaliers (7-1) had their 13-game winning streak snapped in a rematch of last year’s Elite Eight game. They lost for the first time in eight road games dating to last season and produced their lowest point total since March 2017.

The game was billed as a showdown between two of the nation’s stingiest defenses, but Purdue dominated from start to finish.

After the teams opened the game with four straight baskets, Purdue dug in, locked down and seized control by using a 12-0 run over nearly seven minutes to take a 26-9 lead late in the first half.

Virginia never recovered. It got as close as 12 with a little more than a minute left in the half before things got worse.

And just when it appeared Virginia might make one last charge after it cut the deficit to 51-36 with 7:37 to go, the Boilermakers scored 16 in a row to run away.

Virginia: There’s no doubt the Cavaliers can play defense, but they need to find answers on offense. Virginia shot 37.2% from the field, was 4 of 24 on 3-pointers and had 16 turnovers. That’s not how coach Tony Bennett’s teams typically win games.

Purdue: Coach Matt Painter’s club appears to be hitting its stride — just in time for the start of conference play. The Boilermakers have won two straight over ranked teams, this time by beating Virginia at its own game.

Purdue: The Boilermakers entered 0-5 at Mackey Arena against top-five teams from outside the Big Ten. … Stefanovic opened the game by making his first three 3s and finished 6 of 11 from beyond the arc. … Matt Haarms had 11 points and five rebounds, and Eric Hunter Jr. finished with 10 points, five rebounds and four assists. … Purdue made 13 3-pointers, the most allowed by Virginia this season.