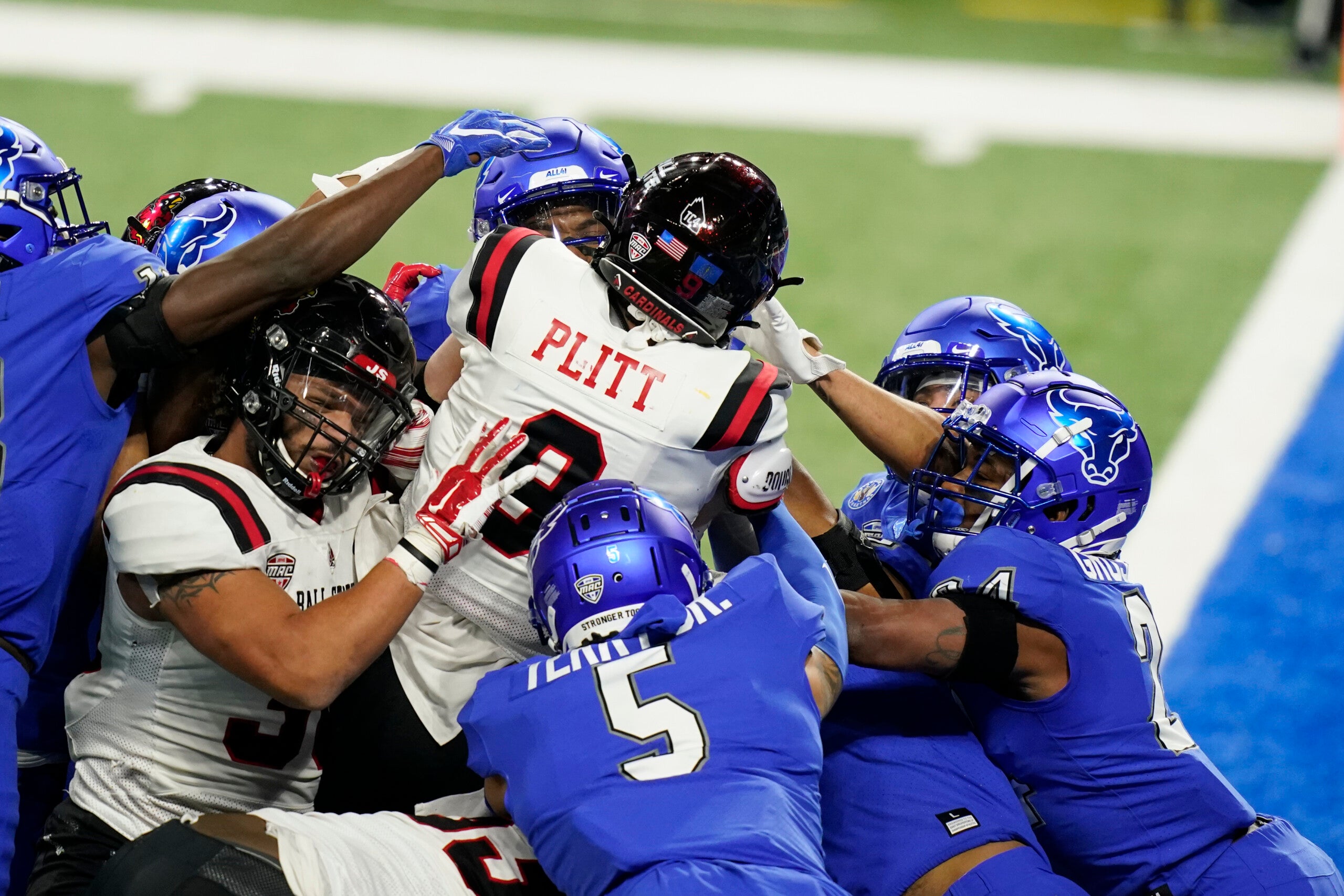 DETROIT (AP) — Drew Plitt threw three touchdown passes and ran for a score in the first half, and Ball State kept Buffalo star Jaret Patterson under control in a 38-28 victory over the 23rd-ranked Bulls on Friday night in the Mid-American Conference title game.

The Cardinals (6-1) won their first MAC championship since 1996, the year before the title game originated. They held Patterson to 47 yards on 18 carries after he’d been averaging over 200 a game. Patterson left with an apparent right leg injury in the third quarter, but he was able to return in the fourth.

By then, Buffalo (5-1) was playing catch-up. The game turned when Ball State scored three touchdowns in the final 5:55 of the first half to take a 35-21 lead.

The Bulls trailed by 10 and had the ball in the red zone when running back Kevin Marks dropped a fourth-down pass in the final quarter.

Buffalo, which hadn’t played a game closer than 19 points in this short season, was trying for its first MAC title since 2008. That year, the Bulls knocked off an undefeated and nationally ranked Ball State team for the championship. The Cardinals returned the favor this time.

Patterson came into the game with 1,025 yards rushing in five games, but he didn’t make much of an impact on this night, and his team was down 38-21 when he left in the third. Marks ran for a 67-yard touchdown in that quarter, passing a clapping Patterson on the sideline, but there was no more scoring after that.

Patterson had only one carry after coming back in the game.

Even with Patterson unexpectedly bottled up, Buffalo led 21-14 in the second quarter. Then the Cardinals scored three touchdowns in succession.

Plitt’s 9-yard scoring pass to Justin Hall tied it at 21. Then the Bulls left Jalen McGaughy open downfield on third-and-12, and Plitt found him for a 56-yard scoring strike with 1:30 remaining.

Ball State wasn’t done. Jimmy Daw knocked the ball away from quarterback Kyle Vantrease, and Christian Albright returned the fumble 34 yards for a touchdown with 48 seconds to play in the half. That was the first sack Buffalo had allowed all season, and it was a costly one.

The start of the game felt routine for Buffalo, which took a 7-0 lead on a 3-yard run by Patterson just 3:01 into the first quarter. But Patterson didn’t have a carry longer than 8 yards all game. He averaged 8.3 per carry through the first five games.

Plitt found Yo’Heinz Tyler for a 10-yard touchdown to tie it at 7. Then Vantrease answered with a 24-yard scoring pass to Trevor Wilson.

Plitt scored on a 1-yard quarterback sneak on fourth down, but Vantrease connected with Wilson for a 57-yard pass that set up a 1-yard touchdown run by the Buffalo quarterback. At that point, Vantrease was 10 of 11 for 196 yards, but the Bulls weren’t doing enough defensively to build a comfortable lead.

Ball State: The Cardinals made Patterson look ordinary even before his injury, and they moved the ball almost at will in the first half. Ball State’s offense and defense both deserve credit for this win. Buffalo hadn’t scored fewer than 42 points in a game all season.

Buffalo: The swing at the end of the first half was decisive, but the Bulls never really had control. Their running game wasn’t consistently explosive, and it took too long for their defense to slow down Ball State.

Buffalo’s stay in the Top 25 is presumably over now.

Both these teams have bowl-worthy resumes, but there’s no telling how the postseason will go in this pandemic-affected season.