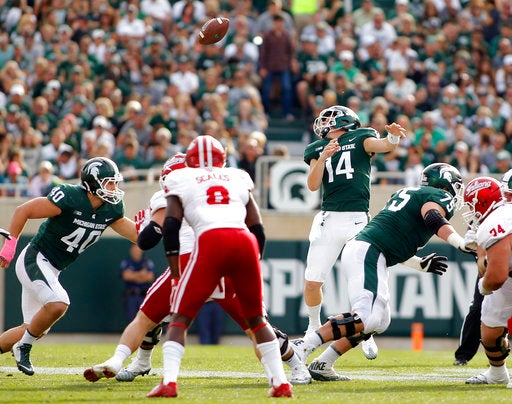 Lewerke struggled for much of the game, but he was able to connect with an open Davis to the left side of the end zone. The extra point by Matt Coghlin put Michigan State (6-1, 4-0 Big Ten) ahead 10-9.

On the next possession, the Spartans forced an Indiana punt – one of 17 the teams combined for. Then LJ Scott ran 18 yards for a touchdown for Michigan State, which may have actually helped the Hoosiers because it gave them the ball back with 1:49 remaining and a chance to tie it.

But Indiana (3-4, 0-4) wasn’t able to cross midfield before turning the ball over on downs.

Shut down for most of the game, the Spartans drove 55 yards for the go-ahead touchdown. Lewerke completed a short pass to freshman Hunter Rison to convert fourth-and-3, and a reverse to Davis on the next play gained 16 yards, setting up first down at the Indiana 13.

Lewerke’s pass to Davis for the game’s first touchdown gave Michigan State a breakthrough in a tough, defensive matchup.

Michigan State is now bowl eligible, a significant step in the team’s recovery from a 3-9 season in 2016. Indiana came up just short for a second straight week against a team from Michigan. The Hoosiers lost in overtime to the Wolverines last weekend.

Griffin Oakes kicked three field goals for Indiana, the last of which put the Hoosiers up 9-3 with 12:29 remaining.

Indiana: The Hoosiers have four losses on the season – Saturday’s, plus defeats against Ohio State, Penn State and Michigan. There’s no great shame in that, but a game defensive effort against Michigan State ultimately went to waste.

Michigan State: The Spartans remain unbeaten in Big Ten play and have certainly exceeded expectations this season. Like many of their victories this year, this wasn’t pretty, but Lewerke made some crucial throws on Michigan State’s two touchdown drives.

Indiana: The Hoosiers play at Maryland next Saturday.

Michigan State: The Spartans go on the road to face Northwestern.

We Stand Together / 33 mins ago