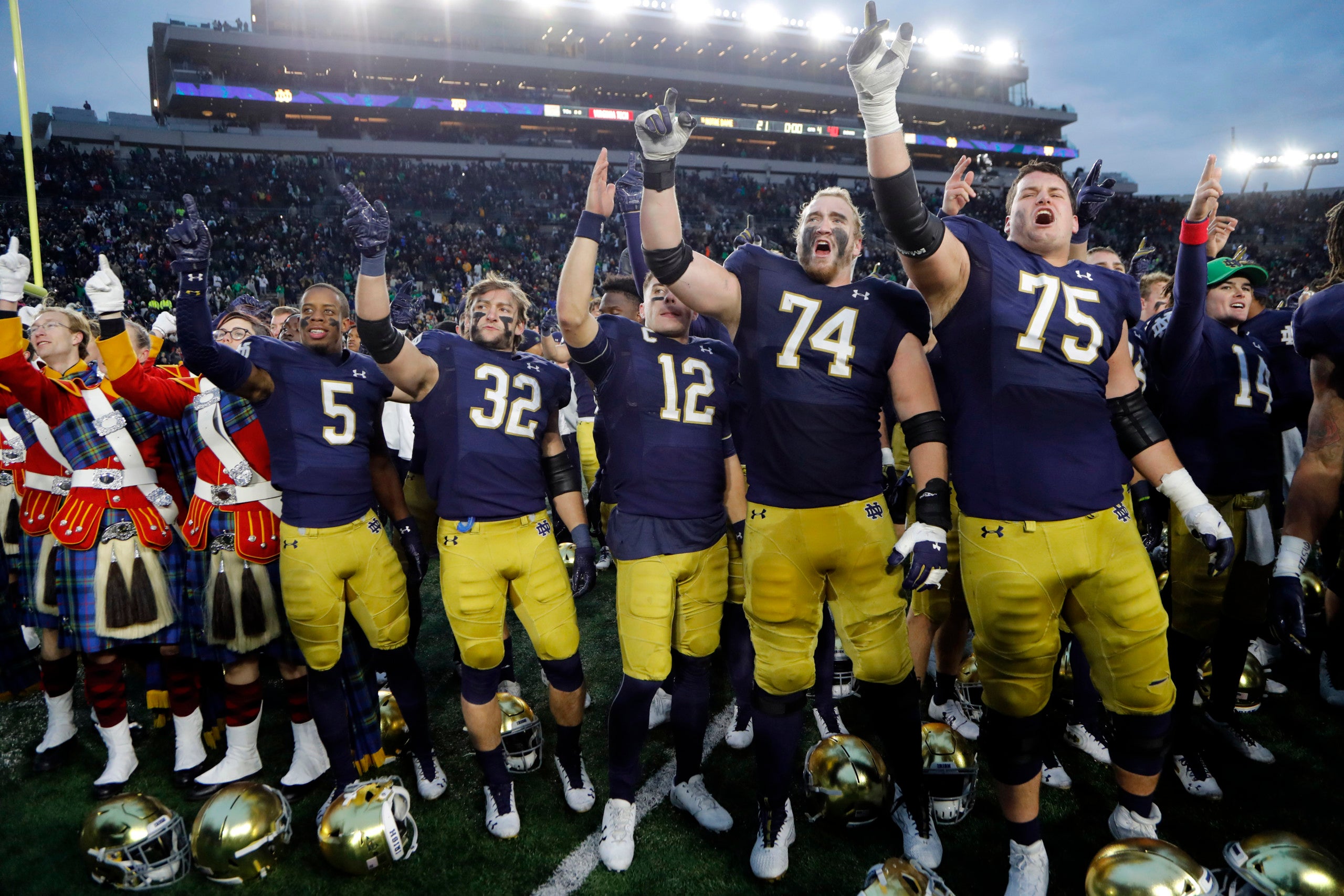 FILE - In this Nov. 2, 2019, file photo, members of the Notre Dame football team sing after an NCAA college football game against Virginia Tech in South Bend, Ind. The Atlantic Coast Conference and Notre Dame are considering whether the Fighting Irish will give up their treasured football independence for the 2020 season play as a member of the league. (AP Photo/Carlos Osorio, File)
by: RALPH D. RUSSO, AP College Football Writer
Posted: Jul 24, 2020 / 03:42 PM EST / Updated: Jul 24, 2020 / 03:42 PM EST

(AP) — The Atlantic Coast Conference and Notre Dame are considering whether the Fighting Irish will give up their treasured football independence to play as a member of the league for the 2020 season that has been thrown into question by the coronavirus pandemic.

Two people involved in the ACC’s discussions about scheduling for the upcoming season told The Associated Press on Friday the ACC is looking at an 11-game schedule that would include 10 conference games and start Sept. 12. There are other models also being considered.

Under the 10-plus-one plan, Notre Dame would play a full ACC schedule, the people told AP, speaking on condition of anonymity because talks are still ongoing and details have not been disclosed. Whether those games would count in the standings and the Irish would be eligible to participate in the ACC championship game — and be eligible for the conference’s guaranteed spot in the Orange Bowl — is still to be determined. The final decision could come down to how revenue is shared between the conference and school, one of the people said.

The ACC’s university presidents will make the final call on a scheduling model. A meeting of the presidents is scheduled for Wednesday, one of the people said.

Notre Dame athletic director Jack Swarbrick declined comment when contacted by the AP via text. A request for comment from the ACC was not immediately returned. Online sports network Stadium first reported Notre Dame could possibly play as an ACC team this season.

In 132 years of playing football, Notre Dame’s storied program has never competed in a conference and its fans cherish the Irish’s status as a football independent. The private Catholic school in South Bend, Indiana, runs a national program with independence as the foundation of its brand.

Giving that up is not something Notre Dame would take lightly, even for a season.

Notre Dame has been a member of the ACC since 2014 for all sports but football and hockey. The Irish have had a scheduling agreement with the ACC in football under which Notre Dame plays five or six games per season against ACC teams.

The Irish had six games scheduled against ACC teams this season, but the pandemic has forced conferences and schools to come up with alternative plans for 2020. The Big Ten and Pac-12 have already announced they will play only conference games this season. That cost the Fighting Irish three games. ACC schools Miami and Virginia Tech also lost nonconference games because of the Big Ten’s decision.

The ACC is aiming to have a new schedule in place by next week.

A hurdle to be cleared for Notre Dame to play as a member of the ACC this season is revenue sharing.

Notre Dame has its own television deal with NBC and its own revenue sharing agreement with the College Football Playoff. Whether the ACC would get a piece of that revenue for this season still must be sorted out, one person said.

The ACC receives $66 million to share among its members annually from the College Football Playoff as part of its agreement with the Orange Bowl. The ACC champion, or another ACC team if its champion is in the playoff, is guaranteed a spot in the Orange Bowl.

Notre Dame normally has access to many of the ACC’s bowl tie-ins, but not the Orange Bowl. Notre Dame’s annual payout from the CFP, even if it doesn’t play in the semifinals or another New Year’s Six bowl, is $3.19 million.