Colts, Pacers step on the diamond for softball benefit 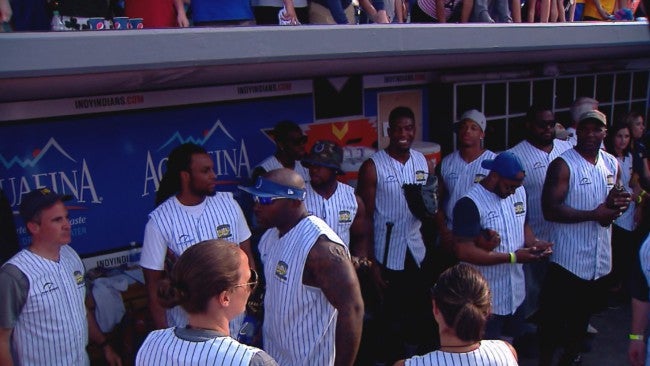 INDIANAPOLIS (WISH) — Wonder what the Colts and Pacers do on their down time?

If it’s early June, many of them pick up their ball gloves and take to the Victory Field diamond.

Colts linebacker Robert Mathis again the Colts team captain, while Paul George takes over for Roy Hibbert. They brought a load of their gridiron and hardcourt teammates and spent time taking pictures and signing autographs for the nice crowd on hand before they played ball.

Both Mathis and George said this event is close to their hearts, even though they mixed in a little smack talk.

“It gets larger and larger every year,” said Mathis. “That’s just a tribute to the city. People come out for a great cause and to support the kids.”

As for his rehab following a torn achilles that forced him to miss last season with the Colts, Mathis plans on being ready for the season opener in September.

“I said it, I meant it. I’ll be ready September,” said Mathis.

Paul George, recovering from his own serious leg injury, was happy to take part.

“Roy always does this, but, you know, he didn’t want to take part in it this summer. You know, I jumped all over it. I wanted to be in this community as always, and, you know, one of the best people in Indiana in Rob. It’s just a great cause,” George said.