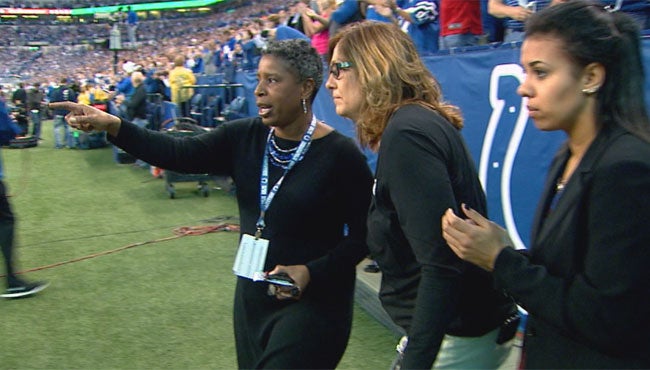 “There’s no one like her,” said Reggie Wayne, Colts receiver. “Whenever she puts her mind to something, it’s going to get done.”

She may not be as recognizable as Reggie, but just like Wayne, she’s had an immense impact on the franchise since she started in 1987. At first, she admitted, being part of the NFL’s “boys club” was a little intimidating.

“When I first came here, I knew it was a predominantly male environment. It’s like 95 percent men, 5 percent women,” said Humphrey. “There’s a sign that says no entry, no one allowed beyond this point, and I never would walk through that door. I could go through that door; it was just for people that didn’t work here, but it was so male-oriented that I just took it for what it was. I’m not allowed.”

For the past 28 years each day on the job for Pam is a little different, from orchestrating on-field events at Lucas Oil Stadium, to coordinating media and corralling a locker room of over 90 young men.

“She’s been there for me since day one,” said Wayne. “Pam is big time, stuff you don’t hear about. She don’t say much. She sits in the back and does her job, and I appreciate everything Pam has done for me since 2001.”

It’s that relationship with the players and coaches that make it special for Pam. Coach Pagano, she added, has a unique approach that makes everyone feel included.

“In his mind, everybody’s important. Everybody has a role to play to get them to Sunday,” said Humphrey. “At a team meeting, he let us all know, everybody in this room is important. Don’t discount this other person because they’re not doing your job. They have a job to do.”

Next Wednesday, 24-Hour News 8 will take a look at one of the few female engineers in IndyCar who helped make Charlie Kimball go, as part of a new series focusing on women who have impacted the Indianapolis sports scene.