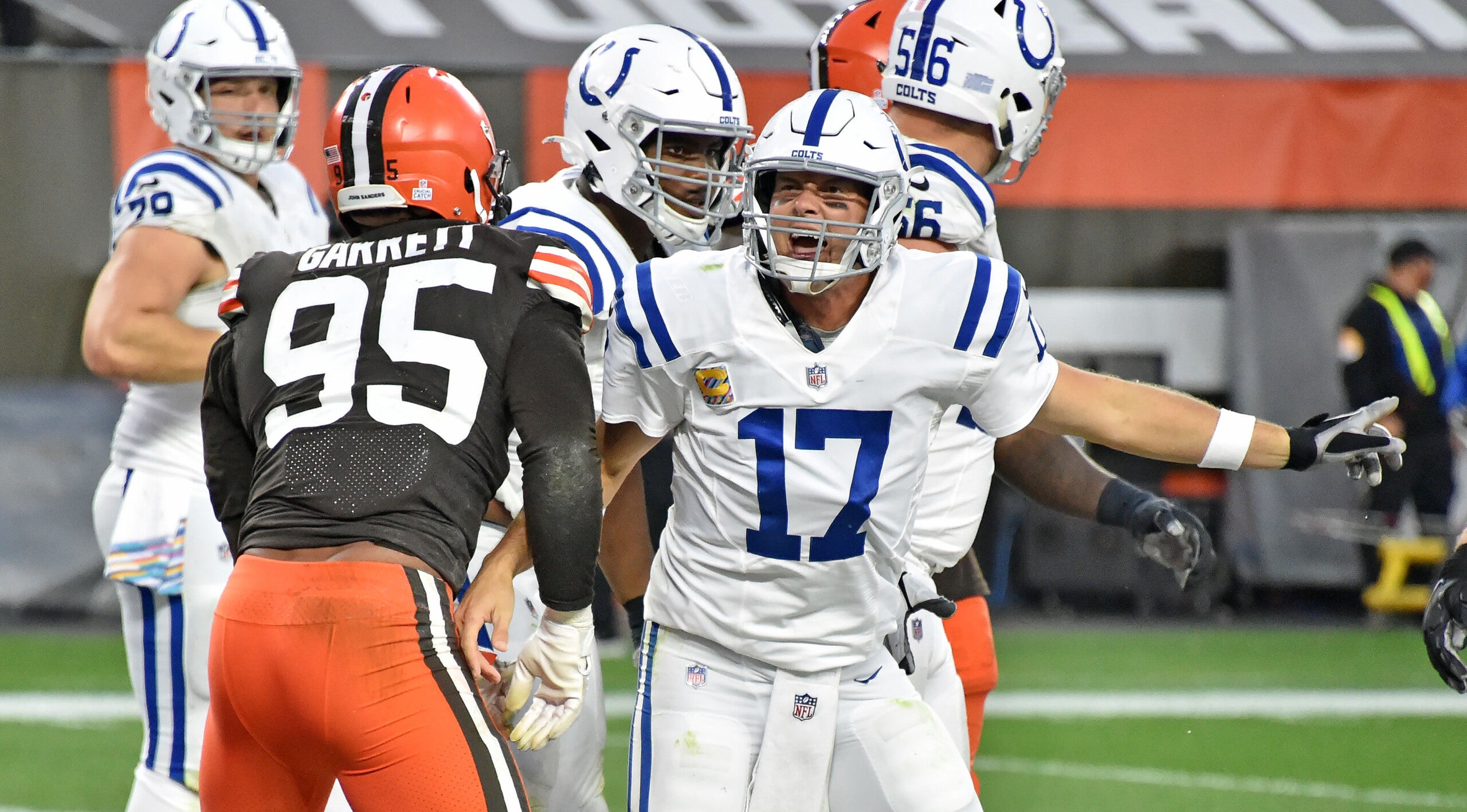 Quarterback Philip Rivers of the Indianapolis Colts argues after being forced into a safety by defensive end Myles Garrett of the Cleveland Browns during the fourth quarter at FirstEnergy Stadium on Oct. 11, 2020, in Cleveland. The Browns defeated the Colts 32-23. (Photo by Jason Miller/Getty Images)
by: Charlie Clifford
Posted: Oct 14, 2020 / 09:27 PM EST / Updated: Oct 14, 2020 / 09:27 PM EST

Reich’s postgame statement Sunday following the Colts nine-point loss in Cleveland — “quarterback” is the “least” of his worries at the moment — didn’t exactly check out.

Upon further review, Reich called the statement a bit “dramatic and overdone” during his Monday media session.

On Wednesday, Philip Rivers emerged from the film room with his assessment of his second two-interception performance over just three road games as a Colts player.

“The first interception, the second interception, none of them are pretty and (in) none of them do I put in the ‘those don’t matter’ category,” Rivers said. “They all matter, but the first one for the touchdown was obviously terrible.”

Rivers and Reich were greeted with a small gift Wednesday at practice.

After missing the trip to Cleveland, left tackle Anthony Castonzo was working, in pads, potentially ready to ease the pressure on his quarterback Sunday vs. Cincinnati. Castonzo officially was listed as a limited participant for Wednesday’s on-field activities.

Regardless, Reich and the offensive staff didn’t notice many changes in their eight-time pro bowl signal caller.

“I just think Philip has a good knack of focusing on the next opponent,” Reich said. “There is always so much work to be done, so much film to watch dialing in on the game plan.”

“We are 3-2. There is no panic here,” Rivers said. “Usually those games you don’t win, if you have a good team, the quarterback probably stunk it up a little bit.”

Not letting a poor performance fester for an entire week? Rivers has been down this road before. So how does he bury the loss to the Browns? Well, the 17-year-pro started on Sunday night, by not taking it home.

“I’ve always been very thankful that having my family at home, my wife and children at home,” Rivers said. “There were some great teaching moments to say, ‘Shoot guys, we can still talk and have a good time and pull in here and get takeout somewhere. We’re not going to just mope around because Dad lost a game.'”

A refreshing response, as the Colts hope the Hall of Fame form is ready to surface in their $25 million dollar gunslinger.