Duke’s Williamson to play vs. Syracuse 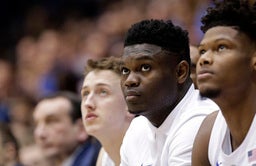 The 6-foot-7, 285-pound Williamson was hurt in the opening minute of last month’s loss to North Carolina. The Blue Devils had been 3-3 with Williamson out.

Williamson – The Associated Press’ player and newcomer of the year in the ACC – is averaging 21.6 points and 8.8 rebounds.

Coach Mike Krzyzewski had been publicly optimistic Williamson would return for the ACC Tournament. He said Williamson performed well in non-contact practice work last week and his status would depend on how he responded to contact work this week.