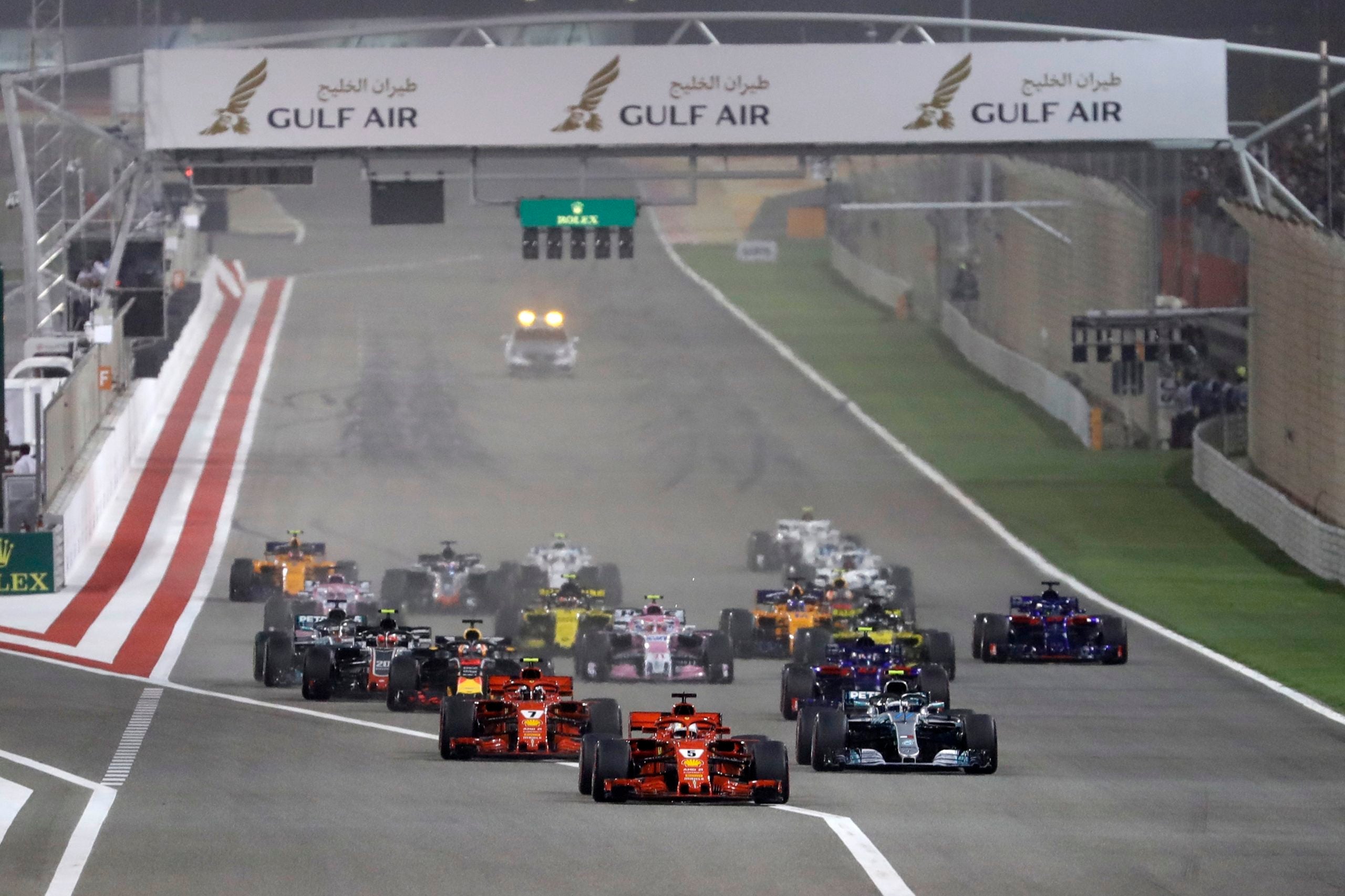 FILE- In this April 8, 2018 file photo, Ferrari driver Sebastian Vettel of Germany, center, leads at the start and followed by Mercedes driver Valtteri Bottas of Finland, right and Ferrari driver Kimi Raikkonen of Finland, left, during the Bahrain Formula One Grand Prix, at the Formula One Bahrain International Circuit in Sakhir, Bahrain. The Formula One race this month in Bahrain will be run without spectators over fears about the new coronavirus, the island kingdom announced Sunday, March 8, 2020, as Mideast stock markets fell sharply amid plummeting demand for crude oil and OPEC's inability to agree on a production cut. (AP Photo/Luca Bruno, File)
by: JON GAMBRELL, Associated Press
Posted: Mar 8, 2020 / 03:37 PM EST / Updated: Mar 8, 2020 / 03:38 PM EST

The extraordinary decision by Bahrain to hold an only televised race March 22 is just the latest disruption felt by the Mideast over the virus and the COVID-19 illness it causes and the second for F1. Already, April’s scheduled Chinese Grand Prix in Shanghai has been postponed.

The wider Mideast now has over 6,980 confirmed cases of the virus. The vast majority are in hard-hit Iran, where the reported death toll jumped by 25% Sunday to 194 out of 6,566 confirmed cases.

Egypt announced its first fatality Sunday when a 60-year-old German tourist died in a hospital in Hurgada, a Red Sea resort town. The Health Ministry said the man tested positive for the virus Saturday and had been traveling in the country for a week.

Bahrain’s Crown Prince Salman bin Hamad, a longtime racing enthusiast whose nation’s sovereign wealth fund owns a majority stake in McLaren, announced the decision via a statement carried by the state-run Bahrain News Agency. The statement described the decision as one to “preserve the safety of citizens, residents and racing fans.”

“As an F1 host nation, balancing the welfare of supporters and race goers is a tremendous responsibility,” the Bahrain International Circuit said in a statement. “Given the continued spread of COVID-19 globally, convening a major sporting event, which is open to the public and allows thousands of international travellers and local fans to interact in close proximity would not be the right thing to do at the present time.”

Bahrain, an island nation off the coast of Saudi Arabia in the Persian Gulf, has so far reported 85 confirmed cases of the new coronavirus. The kingdom has drastically cut air travel and urged residents who recently traveled from Iran to present themselves for testing, warning that those who don’t could face prosecution.

The decision to run the race with participants only was an extraordinary decision for Bahrain and F1, whose watchers say they cannot remember another time when the series held a Grand Prix to an empty grandstand. F1 did not respond to a request for comment.

Bahrain previously canceled its 2011 F1 race over Arab Spring protests there, but held the race in 2012 with fans in attendance. The race drew 97,000 spectators over its full weekend in 2019, the biggest annual event on an island amid its yearslong crackdown on all dissent.

“We know how disappointed many will be by this news, especially for those planning to travel to the event, which has become a cornerstone event of the international F1 calendar, but safety has to remain our utmost priority,” the Bahrain International Circuit said.

The first Bahrain Grand Prix was held in 2004. It is one of two F1 races held in the Mideast, the other being the season-ending Abu Dhabi Grand Prix in November. Australia is still set to hold its F1 Grand Prix on March 13 with spectators.

Meanwhile on Sunday, stock markets across the Mideast suffered sharp drops, in part due to lower crude oil demand as the virus outbreak has cut into air travel. OPEC and key ally Russia also failed to agree on a cut to oil production Friday. That saw crude oil prices, the bedrock commodity of the Mideast, drop. Benchmark Brent crude sold Sunday for around $45 a barrel, down some 11% from the year prior. Prices looked set to drop further as markets open Monday. Edward Bell, an analyst at Dubai’s Emirates NBD, warned a “price war” likely loomed among oil producers.

Hardest-hit was Boursa Kuwait, which saw shares fall more than 10%. The losses triggered an automatic shutdown of the Kuwaiti stock market, its second in recent days.

Saudi Arabia’s Tadawul stock exchange dropped 8.32%, with its marquee Saudi Aramco stock falling below its initial public offering price for the first time. The state-run Saudi Arabian Oil Co. offered a sliver of its value to investors on the market in December.

The Egyptian stock market’s benchmark index, the EGX 30, closed down just over 4%.

In Iran, the Islamic Republic’s national carrier Iran Air said it would stop all its flights into Europe amid the outbreak, the semiofficial ISNA news agency reported Sunday. Iran Air said it was in negotiations to resume its European flights, ISNA said. It did not elaborate.

With the approaching Persian New Year, known as Nowruz, officials kept up pressure on people not to travel and to stay home. Health Ministry spokesman Kianoush Jahanpour, who gave Iran’s new casualty figures Sunday, reiterated that people should not even attend funerals.

Already, authorities threatened the public that they could use “force” to stop people from leaving major cities. Provinces on the Caspian Sea and the Persian Gulf also have urged people not to travel there for the upcoming holiday.

“I urge people to be careful and avoid unnecessary commuting and traveling,” President Hassan Rouhani said, according to state television.

In Iran’s southwestern city of Ahvaz, seven people died from drinking toxic methanol alcohol out of the false belief it could cure the coronavirus, the state-run IRNA news agency reported. It quoted deputy prosecutor Ali Beiranvand as saying 48 others had been hospitalized, with some going blind.

In Saudi Arabia, authorities quarantined Qatif in its Eastern Province, saying that was the origin of all the kingdom’s 11 confirmed cases of the new virus. The state-run Saudi Press Agency said residents would be allowed to return to their homes while all nonessential government offices, shops and schools would be closed.

Qatif is a predominantly Shiite area of the Sunni-ruled kingdom that has seen unrest in the past. Authorities did not say how long the quarantine would last.

Saudi Arabia announced late Sunday all schools and universities would be closed until further notice.