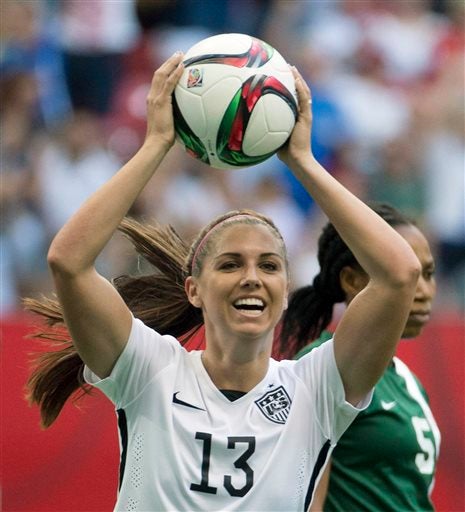 MONTREAL (AP) – FIFA is being criticized for its treatment of the women’s game. Again.

Critics took aim on social media Tuesday after FIFA.com referenced American forward Alex Morgan’s looks in an article posted in advance of the United States’ match against Germany in the semifinals of the Women’s World Cup.

The second sentence of the piece referred to Morgan as “a talented goal scorer with a style that is very easy on the eye and good looks to match, she is nothing short of a media phenomenon.”

One Twitter user asked if FIFA would be commenting on Ronaldo’s looks on the day of a World Cup semifinal.

FIFA was also previously criticized after the match tracker on FIFA.com referred to the players by male pronouns during the tournament-opening match between Canada and China in Edmonton.

In the run-up to the Women’s World Cup in Canada, FIFA and the Canadian organizers were criticized for putting the tournament on artificial turf.

A group of women, led by American star Abby Wambach, filed a claim in a Canadian court that said holding matches on artificial turf amounts to gender discrimination because the men’s World Cup would never be played on fake grass.

And German coach Silvia Neid on Monday said she was dismayed that the German and American players were put up at the same hotel. Teams at the men’s World Cup traditionally stay in different hotels.

“I believe this doesn’t meet the level of professionalism you should expect at a World Cup,” Neid said.