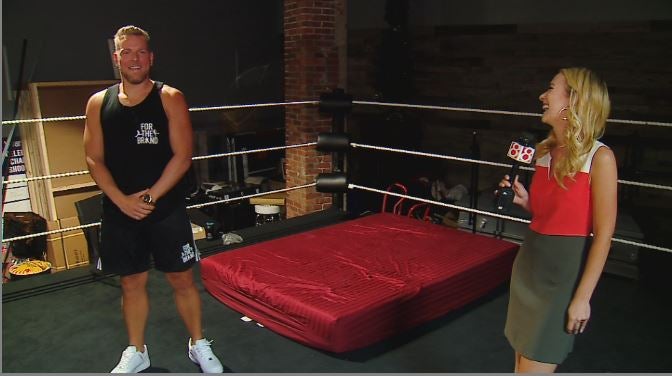 (WISH) — It’s been three years since former Colts punter Pat McAfee walked away from the game of football.

He’s found plenty of projects to keep him busy post-NFL.

McAfee owns and operates his own business, hosts a popular podcast, serves as a sports analyst on multiple networks, and, most recently, he started professionally wrestling.

“I live a very dumb life. When I got drafted to the Colts by Bill Polian I had never punted before in my life, and he said you’ll figure it out,” McAfee said. “Everything I’ve ever done is dumb, and, as I was walking into the ring, and, as I was flying through the air to knock over a bunch of humans, it was actually a pretty cool moment to live out a dream.”

On Saturday, the ex-NFL specialist made his pro-wrestling debut as part of the NXT TakeOver event and, in typical McAfee fashion, went all out.

“Ever since I was a kid, I’ve wanted to be a wrestler,” McAfee said. “I’ve had a wrestling ring for eight years. I had it in the barn in the first house I had. Now, it’s in the office. So, I’d been in the ring a little bit. I was comfortable in it, but I had no idea what I was doing.”

With less than a month of training, McAfee shocked the wrestling world when he held his own with former NXT champ Adam Cole and pulled off some top-rope acrobatics in the match.

“We have a Leesa mattress in this thing that I’ve done backflips on and landed on, but the ring is a lot different, a lot harder than people imagine. I had never landed a backflip into a ring before, so, as I was flying through the air, I was hoping the legs would hold up,” McAfee said.

A few days removed from the ring, McAfee was still a little sore and uncertain if we’ll ever see a Pat Superlex in the future.

McAfee said, “To be honest, I’m not 100% sure if I’ll ever get back in there but, if I don’t, I can die knowing I went out there and gave it my best effort and I did it for the brand. Kickers and punters, I hope I put on for them a little bit.”