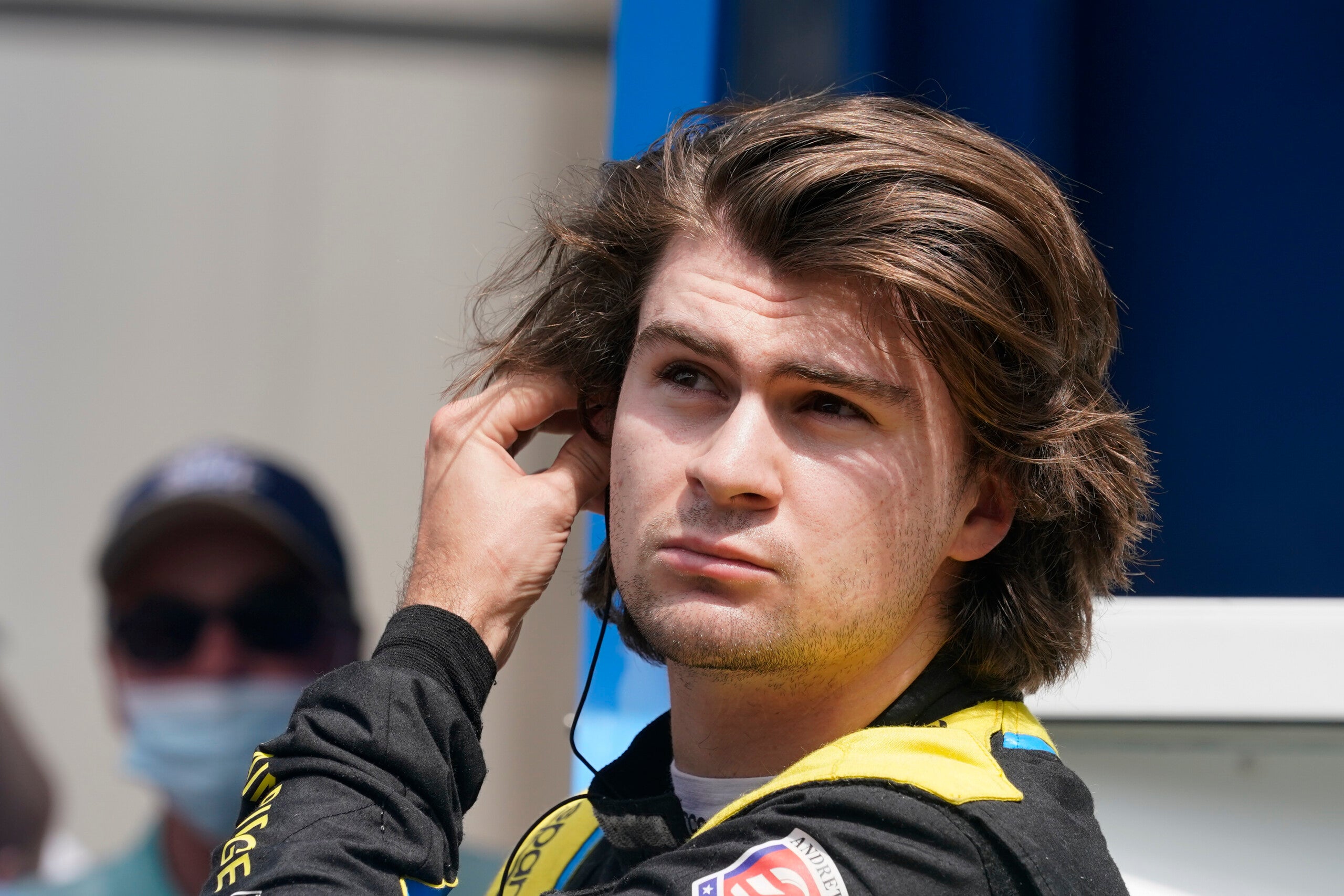 FILE - In this May 23, 2021, file photo, Colton Herta looks at his qualifying speed during qualifications for the Indianapolis 500 auto race at Indianapolis Motor Speedway in Indianapolis. Herta stamped himself as the driver to beat in the inaugural IndyCar Music City Grand Prix, winning the pole Saturday, Aug. 7, 2021, after he was fastest in both practice sessions. (AP Photo/Darron Cummings, File)
by: DAN GELSTON AP Sports Writer
Posted: Aug 7, 2021 / 07:34 PM EST / Updated: Aug 7, 2021 / 07:34 PM EST

NASHVILLE, Tenn. (AP) — Colton Herta zipped around 11 turns, over a bridge and through an NFL parking lot and had one small piece of feedback for IndyCar’s debut race on Nashville’s city streets.

“I’m still not really sure on how easy it’s going to be to pass,” he said.

Herta’s been quite comfortable as the dominant car out front.

The Andretti Autosport driver made the biggest splash of race weekend when he hit a top lap of 1 minute, 13.6835 seconds and won the pole for the inaugural IndyCar Music City Grand Prix — after he was fastest in both practice sessions.

“The car is really stable and something I can really take into the race and be happy with,” he said.

The 21-year-old Herta was more than a half-second faster than six-time series champion Scott Dixon in second. Herta, who has one win this season, won his sixth career pole.

“I think this is going to be the craziest start of the year,” Herta said.

The two Honda drivers on the front row will lead the field to green in one of the more anticipated races outside the Indianapolis 500 in years for IndyCar. The 2.17-mile, 11-turn track includes a 3,500-foot straightway that spans over the Korean War Veterans Memorial Bridge.

IndyCar points leader Alex Palou actually qualified third but was forced to start ninth after he was hit this week with a six-position starting grid penalty for an unapproved engine change following a team test at Portland International Raceway.

Jimmie Johnson starts 25th after he damaged his car when he hit the wall moments into the first round of qualifying. Josef Newgarden, the Tennessee native who served as the unofficial race host, lost his chance at a fourth straight pole when his front right wing smashed into the wall and sent debris onto the track.

“This is the city where IndyCar needs to be,” Newgarden said. “This is crazy cool. I’m pretty pumped for (Sunday). I just wish we were higher up.”

The pole trophy was named in honor of Bryan Clauson as part of the event’s partnership with Tennessee Donor Services to raise awareness for organ and tissue donation. Saturday was the five-year mark of Clauson’s death. The 27-year-old racer died from injuries suffered in a crash at the Belleville Nationals midget race in Nebraska.

Dixon rebounded in qualifying for Chip Ganassi Racing after he smacked the wall in practice. He rebounded from a big hit — and Grand Prix officials hope they can do the same on race day.

Chris Parker, President of the Music City Grand Prix, said this week at the Country Music Hall of Fame the series was prepared for any potential setbacks.

It didn’t take long to find a problem.

One of the grandstands on the first turn of the track wasn’t ready for the start of Friday’s session, was incomplete Saturday and construction was set to continue overnight to try and have it completed by Sunday. Grand Prix promoters planned refunds for all days lost and inconvenienced fans were relocated to open seats. The fans will be able to return to their original grandstand seats if construction is finished by Sunday.

The Grand Prix blamed “continued construction and logistical delays experienced by our vendor.”