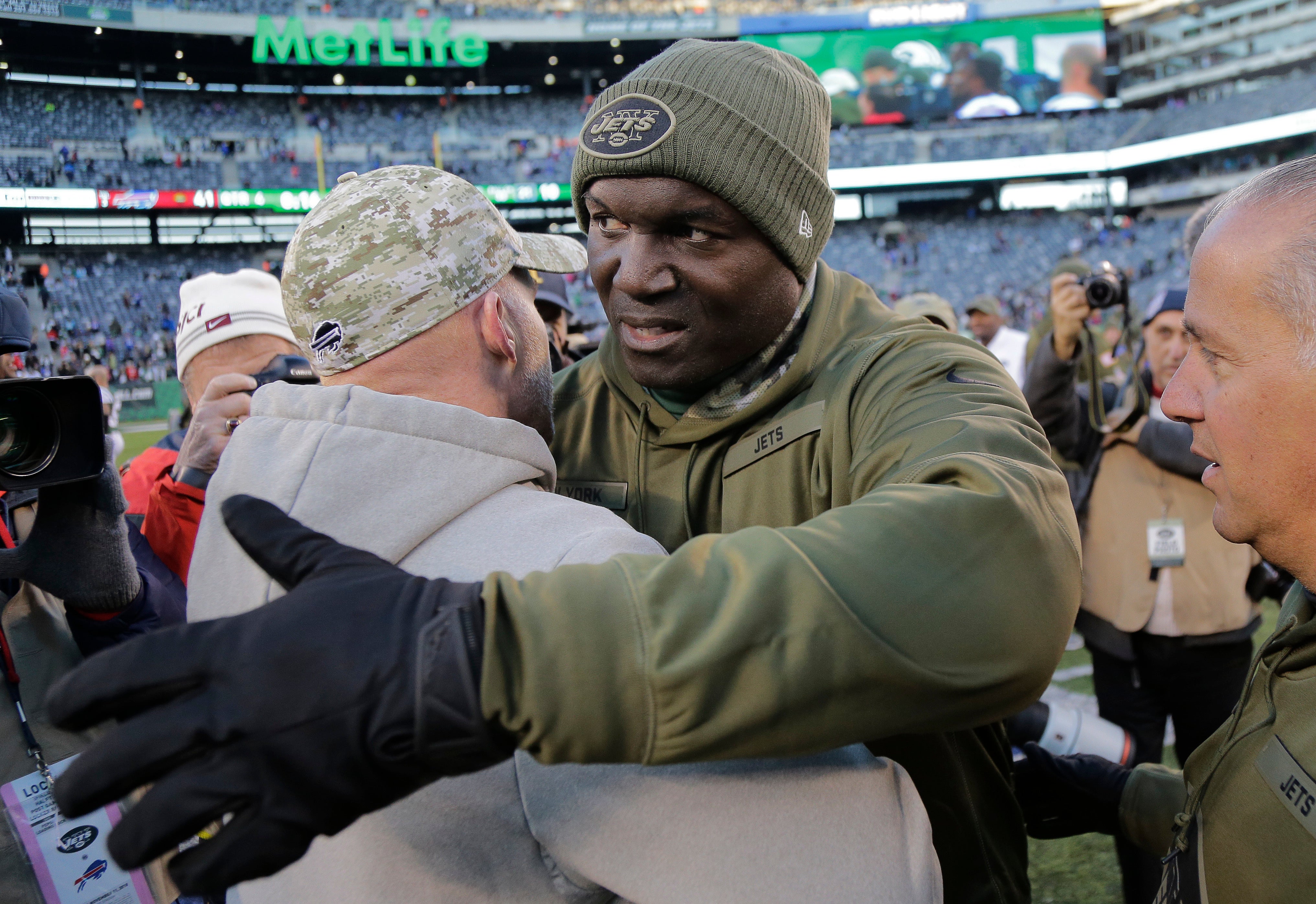 Time to start the “Which coaches are on the way out?” watch in the NFL, and all eyes are on Todd Bowles of the New York Jets at the moment.

How quickly it all fell apart for them.

How soon could Bowles be gone? Consider that the Jets now head into a bye week. So that might make sense as a time to make a change for a club that had zero fight in it during a 41-10 loss Sunday against the visiting Buffalo Bills and quarterback Matt Barkley, of all people.

Here’s another comment that was rather telling: “That’s the first time I felt like somebody really smacked us,” Jets cornerback Morris Claiborne said, “and we didn’t do nothing about it.”

Keep in mind that the Bills are nothing special. Barkley is worse than that – a has-been who never was, nearly two years removed from his most recent NFL start. But defensive guru Bowles couldn’t come up with anything to stop the guy.

Now the Jets are 3-7 and heading in the wrong direction, losers of four straight games.

Bowles shouldn’t stand alone in terms of questions about how much longer he will – or should – last in his current job.

As embarrassing as the Jets suddenly are, Bowles is hardly the only coach whose club is looking unprepared and unable to compete lately:

– Doug Marrone’s Jacksonville Jaguars somehow immediately went from AFC runners-up to also-rans, dropping five consecutive games to fall to 3-6 after a 29-26 loss to the Indianapolis Colts;

– Dirk Koetter’s Tampa Bay Buccaneers somehow beat the New Orleans Saints and Philadelphia Eagles in Weeks 1 and 2 but have lost six of seven games since to sit at 3-6 after a 16-3 setback against the visiting Washington Redskins;

– Jon Gruden is not going anywhere anytime soon, of course, but his Oakland Raiders are as bad as it gets right now, going to 1-8 after losing five games in a row by at least 14 points each, the latest a 20-6 defeat at home against the Los Angeles Chargers.

“This will be a year that a lot of us will never forget,” Gruden said. “It’s painful.”

Jets fans probably feel the same way about their season.

In case you missed it, here are other top topics after the NFL season’s 10th Sunday:

Washington Redskins cornerback Josh Norman celebrated a road victory by blasting the NFC East leaders’ home fans, saying it seems like they “just don’t really care; they just boo everything and aren’t really behind us.” Washington is 3-1 in away games, 3-2 at home. “We can play all the games on the road, if you ask me,” said Norman, who had an acrobatic interception early, one of four turnovers forced by Washington’s defense against the Bucs. Later, Norman sent out a tweet encouraging spectators to be more supportive and enthusiastic at home. After all, with a 6-3 record, a two-game division lead over the surprisingly so-so Super Bowl champion Eagles and the Cowboys (both 4-5 after Dallas beat Philadelphia 27-20 with the help of a hurdle by Ezekiel Elliott) and an easy schedule the rest of the way, the Redskins would host a playoff game if they avoid a collapse.

This week’s most original TD celebration – remember when the league tried to discourage all of those with penalties and fines? – came courtesy of Kansas City Chiefs speedster Tyreek Hill. After catching one of Patrick Mahomes’ two TD passes in KC’s 26-14 win over the Arizona Cardinals, Hill hopped into the stands and grabbed ahold of a TV camera, managing to record images of some teammates whooping it up, as well as the flag he earned for unsportsmanlike conduct. Chiefs coach Andy Reid was not exactly thrilled by that aspect of the charade. “That was too much,” Reid said. “I’m all into the ‘personality’ thing, but he was … out of character there.”

Give Los Angeles Rams QB Jared Goff credit for directing a potent offense that’s helped his team get off to a 9-1 start. Give him credit, too, for quite an audible in LA’s 36-31 victory against the Seattle Seahawks, name-checking Oscar winner Halle Berry.