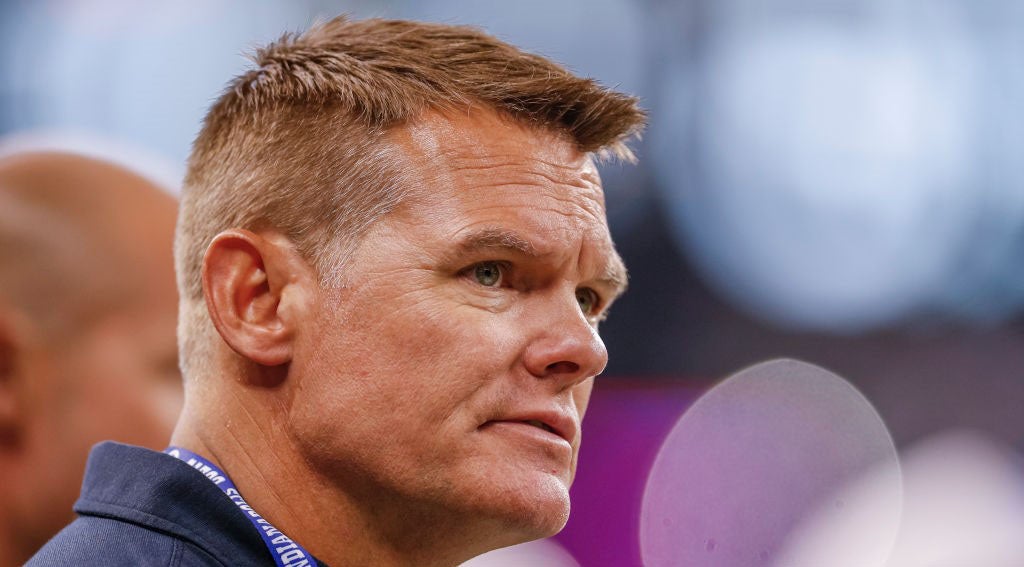 INDIANAPOLIS (WISH) — As the Colts complex opens its doors to players for the first time since the NFL’s COVID-19 shutdown, Colts General Manager Chris Ballard and Coach Frank Reich addressed the media Wednesday to discuss the work ahead of Week 1 at Jacksonville on Sept. 13.

Each spoke at length on Wednesday afternoon about the safety changes at training camp during the coronavirus pandemic, along with new details on Philip Rivers arrival in Indianapolis and the 2020 kicking situation.

Chris Ballard wants you to wear a mask.

Before we break down the physical changes around West 56th Street, the Colts fourth-year general manager believes it is paramount that we look our for our neighbors.

During his opening statement, Ballard made his message clear: “Everyone needs to wear a mask. I don’t understand why that’s such a controversy in our country right now. Put a damn mask on. It’s not about you.”

Ballard said those outside the organization “have no idea” how hectic the last two months have been, as the team formed an Infectious Disease Emergency Response plan.

The safety measures are being led by longtime Head Athletic Trainer Dave Hammer.

Ballard on the importance of Hammer and the organization as a whole this season: “His job is to carry out the protocols, everything we are doing in the building from screening to making sure we have social distancing in the cafeteria, the locker room, in the break room, meeting rooms. He has made all the hallways one-way marked so we don’t get big groups of people walking together, placing dividers between every locker. Just a ton of protocols. He has gone above and beyond.”

Philip Rivers is adjusting well to his change of scenery

The Colts asked the 38-year-old quarterback this off-season to make some changes to his nutrition and workout plans ahead of his arrival in Indianapolis.

Reich downplayed the gravity of the audibles, but also noted that Rivers has been more than willing to adjust how the Colts operate: “Philip has done things a certain way.

“He knows they work. When he and I were together before, we talked a lot about this before – small, incremental changes. One thing when you get to be an older vet – I don’t like to see older vets all of a sudden do some drastically new things. Many times that backfires. I have talked to our strength and conditioning staff. I’ve talked to Philip. We all have the approach of Philip knows what he’s doing. He’s been doing this for a long time. He knows how he works, but Philip agrees and we agree that he can get better just because it’s Year 17 and he’s 38 years old, there are ways that he can physically get better. So he’s committed to doing that.”

Both Ballard and Reich confirmed the Colts 2020 kicker battle is a two-man competition between second-year pro Chase McLaughlin and undrafted rookie Rodrigo Blankenship.

It appears the opportunity Vinatieri has to kick for a 25th NFL season will have to come in the form of a team needing an emergency option in 2020: “Adam’s still working in the rehab (knee). So as far as the competition between those two guys, yeah, I don’t mind spelling that out a little bit. Without any preseason games, we will just have practices in general will be competitive, but we will have some competitive kicking contests in the middle of practice, at the end of practice. We’ll try to create as many high-pressured scenarios as we can for those competitions.”

The pair teamed up during Philadelphia’s Super Bowl LI championship run and after a disappointing, injury plagued 2019 season with Chicago, Burton apparently landed in the perfect spot.

“Trey Burton is another really important piece to this equation,” Reich said. “I think Trey is going to have a really productive year. But I was with Trey for two years so we have a vision. I’ve talked to Philip (Rivers) a lot about the role we envision Trey going into. As an offensive staff, Nick (Sirianni) and I have talked a lot about that.”

The Colts hesitated to work on contract extensions the off-season due to uncertainty surrounding the 2021 salary cap.

Now, it appears those concerns have subsided and Kelly, a free agent to be after this season, is likely the first in line for a new deal.

“Now, we have a little more clarity and we’re currently working on a plan of how we want to move forward,” Ballard said. “I’ve always been one that you want to try to lock up your own players early and get them locked up, but, with so much uncertainty out there, we didn’t know what the next two or three years were going to look like. … Now that we have a little more clarity, we’ll have some lines in the water and see what happens.”

Wipe out four preseason games and any opportunity to host or travel for a joint practice with another NFL club — then how the heck can teams get ready for full speed action on Week 1?

Ballard cited that college football does it every season and in an effort to be as prepared as possible, a couple changes are on the way.

“We’ll probably have two or three occasions when we really get after it,” Ballard said. “We have to play. We have to get our team ready for the season. You’re going to see some more physical practices in spurts just so we can get ourselves ready to go and to be able to evaluate. You have to evaluate the game and our players going full speed. So yes, we will have a few more of those.”

“Knock on wood,” Ballard said and then laughed. “We’ve seen a lot, and we’ve had to handle a lot. The team has had to handle a lot. I do think when you show people, when there is a problem, when there is something bad that happens, that you’re not going to flinch and you’re not going to cave to pressure of the situation, I do think it helps. I think it’s going to help our team.”