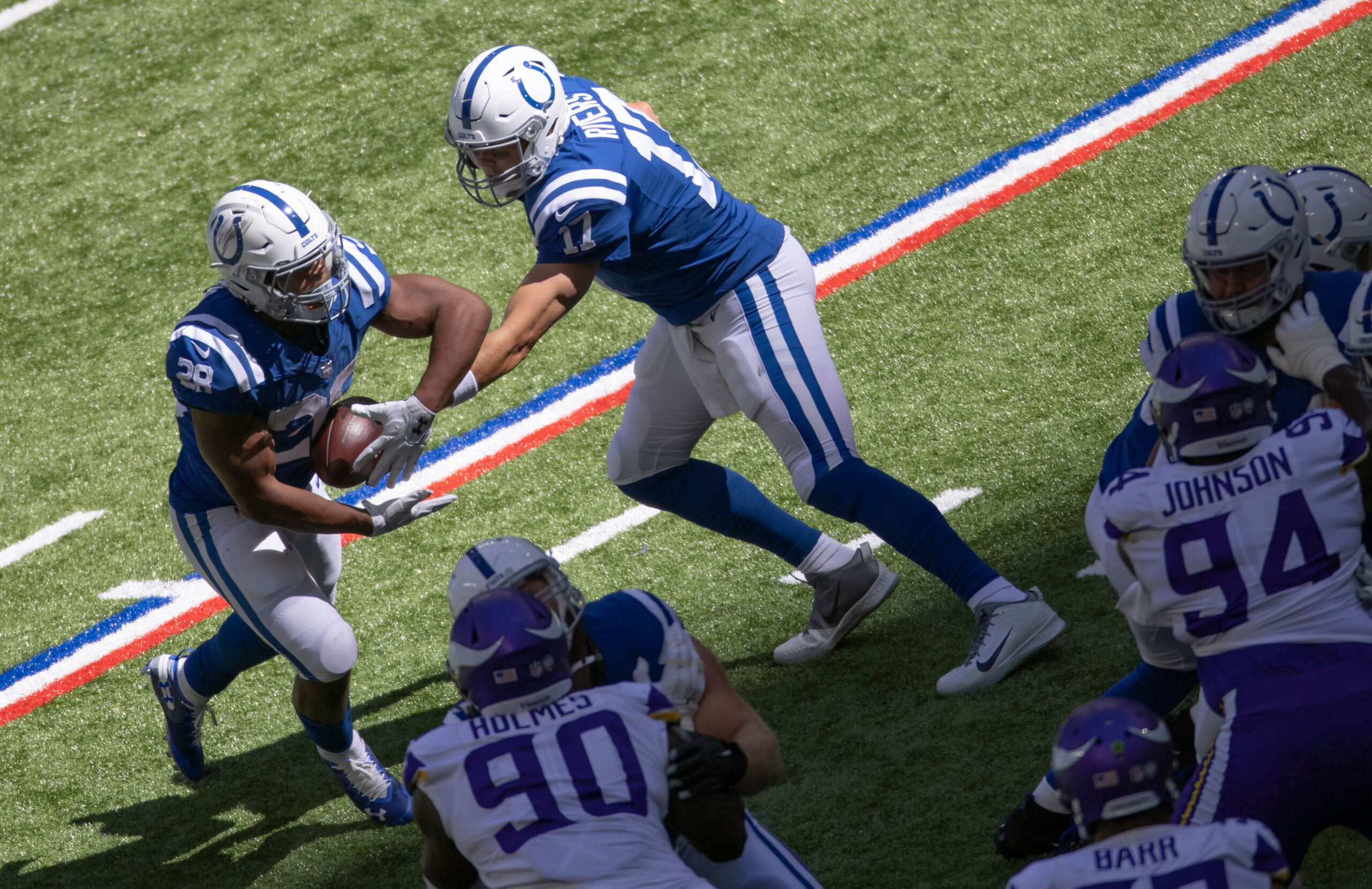 INDIANAPOLIS (WISH/AP) — The roof was open at Lucas Oil Stadium Sunday as the Colts took on the Minnesota Vikings for their season home opener, winning 28-11.

Due to the coronavirus pandemic, only 2,500 fans were be allowed to take a seat inside for the game.

The San Francisco 49ers, Tennessee Titans, Philadelphia Eagles, Los Angeles Rams, Indianapolis Colts and Detroit Lions were seen by reporters during the “The Star-Spangled Banner,” and while many players stood, some took a knee or raised a fist.

The Colts lined up across a goal line for the playing of “Lift Every Voice and Sing.”

Indianapolis Colts coach Frank Reich went down on one knee as his players lined the sideline.

Before other games across the league Sunday afternoon, some players and teams stayed off the field during the national anthem while some players took a knee or stood with a fist raised such as San Francisco 49ers wide receiver Kendrick Bourne.

One week after the Indianapolis Colts lost running back Marlon Mack with a season-ending ruptured Achilles tendon, second-year receiver Parris Campbell was carted off the field after appearing to injure his left knee.

Campbell was injured on the Colts second play. Vikings safety Harrison Smith made the hit and Campbell immediately reached for his knee. He missed most of his rookie season with injuries and went into the concussion protocol after an August traffic accident.

Will Frank Reich watch Matt Eberflus’s defense stand up after a concerning theme continued during week one? Jacksonville’s Gardner Minshew’s 19 of 20 passing day is nothing new if you stayed tuned in late last season. Eberflus’s scheme allowed opposing quarterbacks to complete 75% of passes over the last six regular season games last year.

DeForest Buckner said he personally didn’t play up to his own standards during his Colts debut. And Colts quarterback Philip Rivers is looking forward to the home opener, despite major fan capacity changes.

“It’s exciting. Certainly, I wish there were about 58,000 more than there is allowed to be in there, but it will be good,” said Rivers. “It will be good to be at home and we want to bounce back from last week. It’s a long season, but it will be exciting to be at Lucas Oil (Stadium) and playing in our stadium. First home game – and again, what fans can be in there I’m sure they’ll be excited to be in there and we look forward to it as well. This season is a long year. I know I think Frank (Reich) mentioned it, I know he mentioned it to us. He probably mentioned to you guys as well. We don’t want to ride the wave of this year, ups and downs that are going to come – stay focused.”