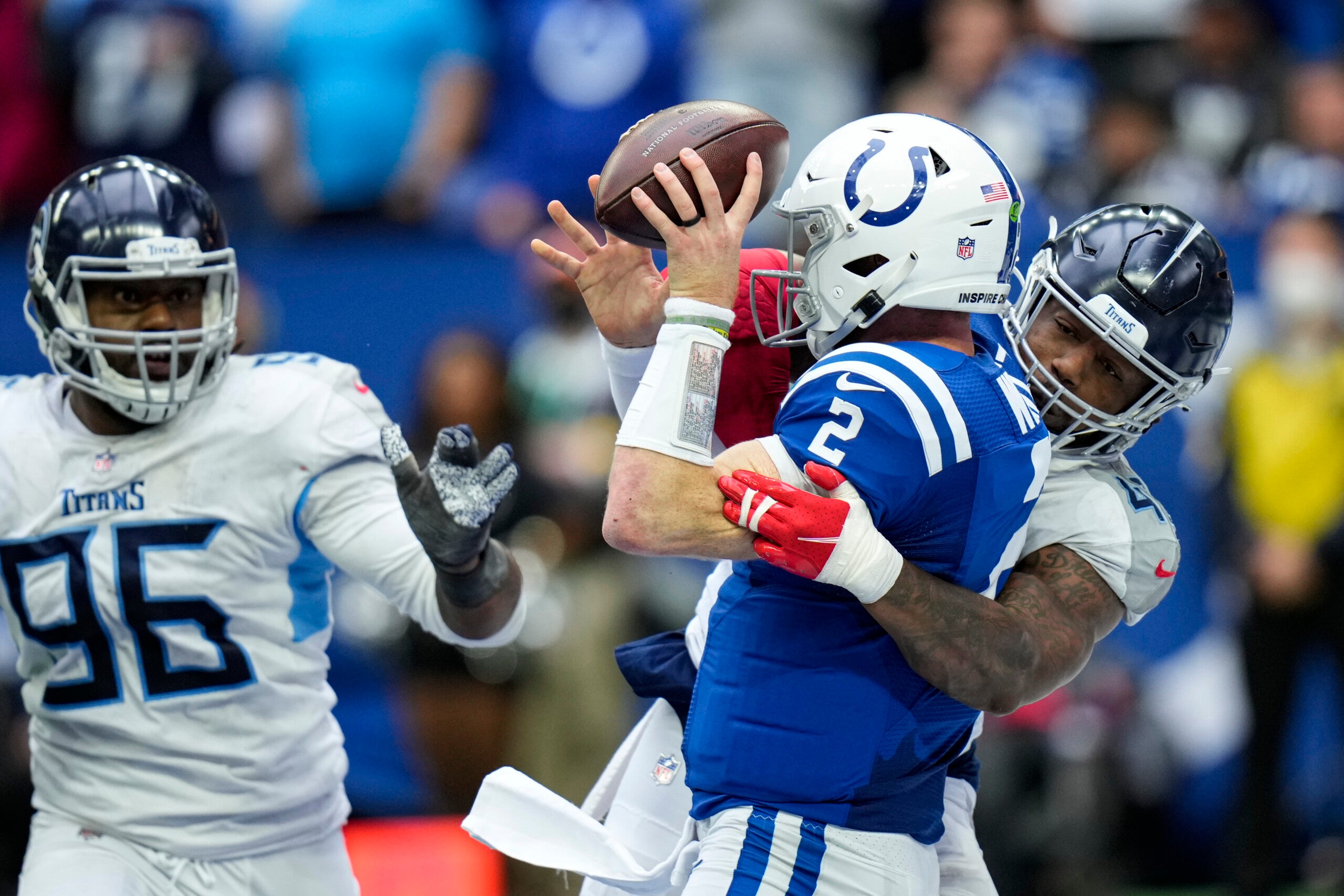 INDIANAPOLIS (AP) — The Indianapolis Colts should be adjusting their expectations.

They trail division-leading Tennessee by three games and the gap essentially expands to four when factoring in the Titans season sweep. It’s a wide margin after eight weeks, even in a 17-game season — and even if two-time NFL rushing champ Derrick Henry doesn’t take another snap with Tennessee this season.

“I understand it’s a really big hole to come back from and win the division, the odds are really stacked against us,” he said after Sunday’s 34-31 overtime loss put Indy in this predicament. “I’m just not wired to think like that. The way I’m wired, the way our team is wired is we’ve got a game on Thursday night. We have to come back.”

A short week should help Indy move on quickly after seeing another winnable game slip away, this one with potentially long-term consequences.

With five losses, three at home, the Colts now face a daunting task to get back into division title contention.

While wins over the New York Jets (2-5) this week and Jacksonville (1-6) next week would get the Colts to .500 for the first time this season, the ensuing six-game stretch poses a major challenge. It includes trips to Buffalo and Arizona with home games sprinkled in against Tampa Bay, New England and Las Vegas.

So even navigating the more manageable journey to one of the AFC’s seven playoff spots would require Indy to beat some playoff contenders. And, regardless of Henry’s injury status, the Colts can’t afford many more stumbles.

Yes, it’s a difficult task, one they’ve accepted with the same unrelenting approach of Reich.

“Football’s funny. You practice hard, you put in the work and sometimes it’s just not working out,” tight end Jack Doyle said Monday. “You know the process works, you know how we do things here. So you dig deeper into that and you keep working and you know that the ball will start bouncing our way in those games.”

Finishing games. Indy led 14-0 midway through the first quarter, but instead of extending the margin and closing it out, they let the Titans charge back. It’s the second time in four weeks Indy has squandered a late lead.

Pittman. He caught 10 passes for 86 yards against Tennessee and had two TD catches in the first 7 1/2 minutes. Pittman clearly is Wentz’s favorite target.

Wentz. Despite playing well through the first 58 minutes Sunday, his performance will be remembered for two things: the costly late interceptions that gave away 10 points. Wentz still believes Indy will turn it around and the Colts are on board, too. They released veteran backup Brett Hundley on Monday, leaving rookie Sam Ehlinger as the only other quarterback on the roster.

“I’m confident in this locker room,” Wentz said. “That’s one thing that continues to show up and shine in there. We’re so close in these games and we’re so confident in each other and our ability to move forward.”

2.4 — The defensive goals are clear: No 100-yard rushers and holding teams to 3.7 yards or fewer per carry. They achieved both against the Titans, limiting Henry to 68 yards on 28 carries, a 2.4 yard average.

The Colts have played well enough to win — when they’re relatively mistake-free. While nobody expects them to play a perfect game, three turnovers and nine penalties are simply too much to overcome against good teams. Indy has less time than usual to make the corrections before the Jets arrive.