Colts fall 30-24 to Chargers in overtime 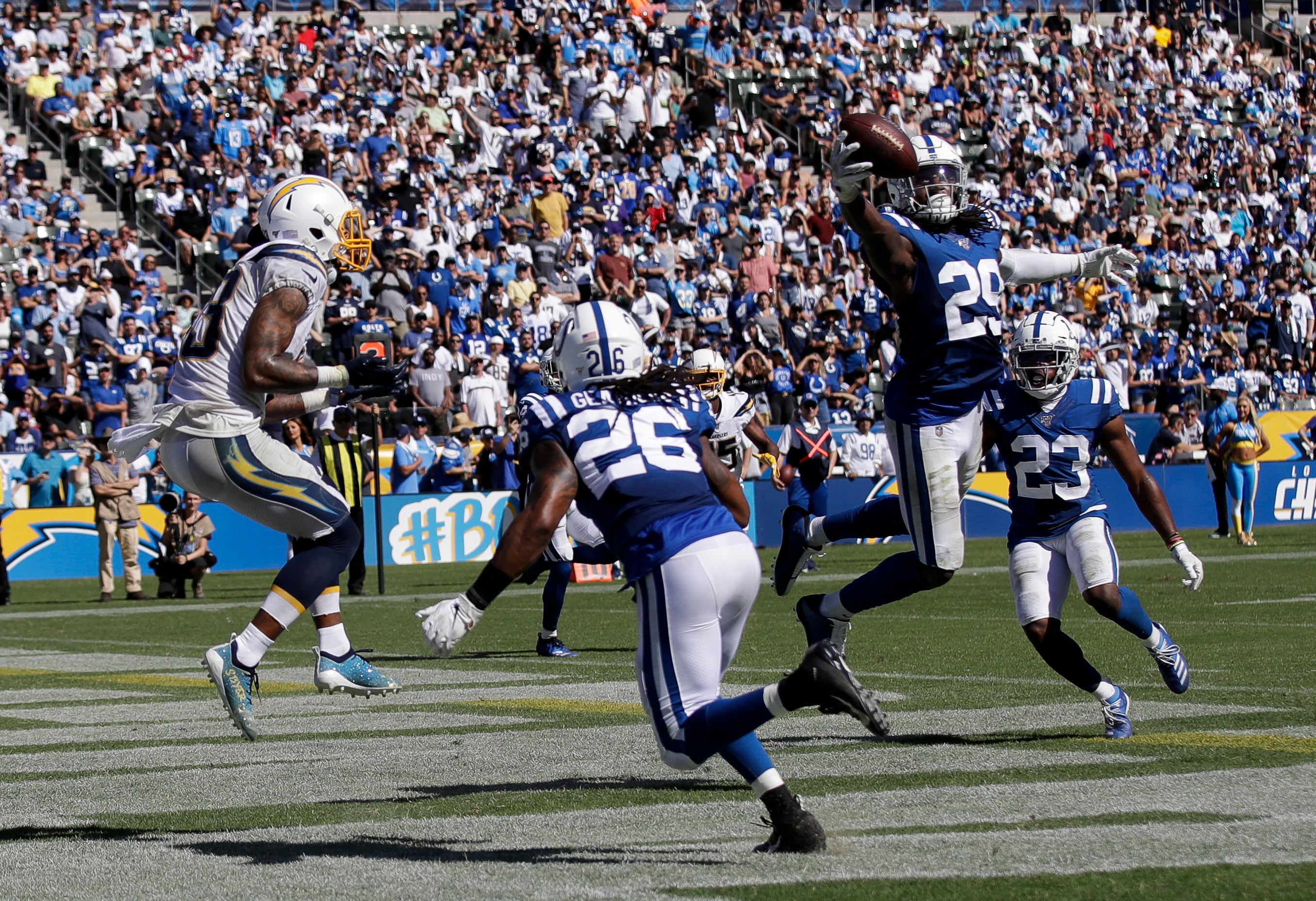 CARSON, Calif. (AP) — Austin Ekeler scored three touchdowns, including the winner on a 7-yard run with 5:01 remaining in overtime, to give the Los Angeles Chargers a 30-24 victory over the Indianapolis Colts on Sunday.

The Chargers got the ball to start overtime and went 75 yards on eight plays. Ekeler, the Chargers’ lead back with Melvin Gordon holding out for a new contract, had 154 all-purpose yards on the day. He ran for 58 yards on 10 carries and caught six passes for 96 yards and two scores.

Rivers, who made his 209th consecutive start to pass Peyton Manning for third longest among NFL QBs, completed 25 of 34 passes for 333 yards. It is the fifth time Rivers has thrown three or more TD passes in an opener.

The Chargers led 24-9 midway through the third quarter before allowing 15 straight points to force overtime. Marlon Mack, who had 25 carries for 174 yards, brought the Colts within 24-16 after Ekeler’s second touchdown with a career-long 63-yard scamper up the left sideline.

Indianapolis tied it with 48 seconds remaining when Jacoby Brissett hit T.Y. Hilton for their second scoring connection of the day. Hilton caught the ball at the Chargers 19, made Adrian Phillips miss and then was able to extend the ball over the pylon before going out of bounds.

The tying drive was set up when Malik Hooker made a great one-handed interception in the end zone on Rivers’ pass intended for Keenan Allen. Hooker returned the pass to the Colts 20.

Brissett, now the Colts’ starter with a lucrative contract after Andrew Luck retired last month, had a solid game, going 21 of 27 for 190 yards and two touchdowns. Hilton caught eight passes for 87 yards.

Ekeler opened the scoring with a 1-yard reception. Ty Long kicked a 22-yard field goal earlier in the series, but Indianapolis’ Denico Autry was called for unnecessary roughness. The Chargers took the points off the board to go for the touchdown.

Ekeler then went 55 yards on a screen pass on Los Angeles’ first drive of the third quarter to extend its lead to 24-9. Ekeler shed attempted tackles by Darius Leonard and Pierre Desir before motoring up the right sideline.

Allen had 10 receptions for 123 yards, including a 28-yard touchdown in the second quarter on which he outmuscled Rock Ya-Sin in the end zone.

Brissett tied it at 7 with a 4-yard strike to T.Y. Hilton.

Long became the first player since Miami’s Olindo Mare in 1997 to have an extra point, field goal and punt in his first NFL game. Long, signed during the offseason after two years with the BC Lions in the Canadian Football League, was pressed into kicking duty after Michael Badgley suffered a groin injury in Friday’s practice. Long also became the eighth Chargers kicker in a game since the start of 2017.

Meanwhile Indianapolis’ Adam Vinatieri experienced something for the first time in his 24-year career: two missed field goals and a missed extra point in the same game. It is the 18th time he has missed two or more field goals in a game.

Colts: travel to Tennessee next Sunday. Indianapolis won both meetings last season, including 33-17 in Week 17 which gave the Colts the final AFC playoff spot.

Chargers: at Detroit next Sunday. Los Angeles has won seven of the last eight in the series.

The star power is missing Sunday in Los Angeles as Andrew Luck’s shocking retirement and Charged pro bowl running back Melvin Gordon’s holdout leave plenty of uncertainty for both teams.

The Colts’ newly anointed starter Jacoby Brissett already brokered his own new contract this week. His week one proposition — keep Frank Reich’s high-powered passing attack intact, despite all the doubt around the rest of the league after Luck’s exit.

“As much as everyone loves, appreciates and understands how great of a player Andrew (Luck) was, we all know that this game doesn’t revolve around one player,” explained Frank Reich. “I think at some level when something like that happens there is a mindset to say, ‘Hey, this is a team. We are a team.’ So I think we play off that. It’s not a big deal, but I think that’s human nature.”

Brissett’s impromptu takeover looks fine from a practice standpoint. He racked up over 1,200 reps with the starting offense throughout the offseason.