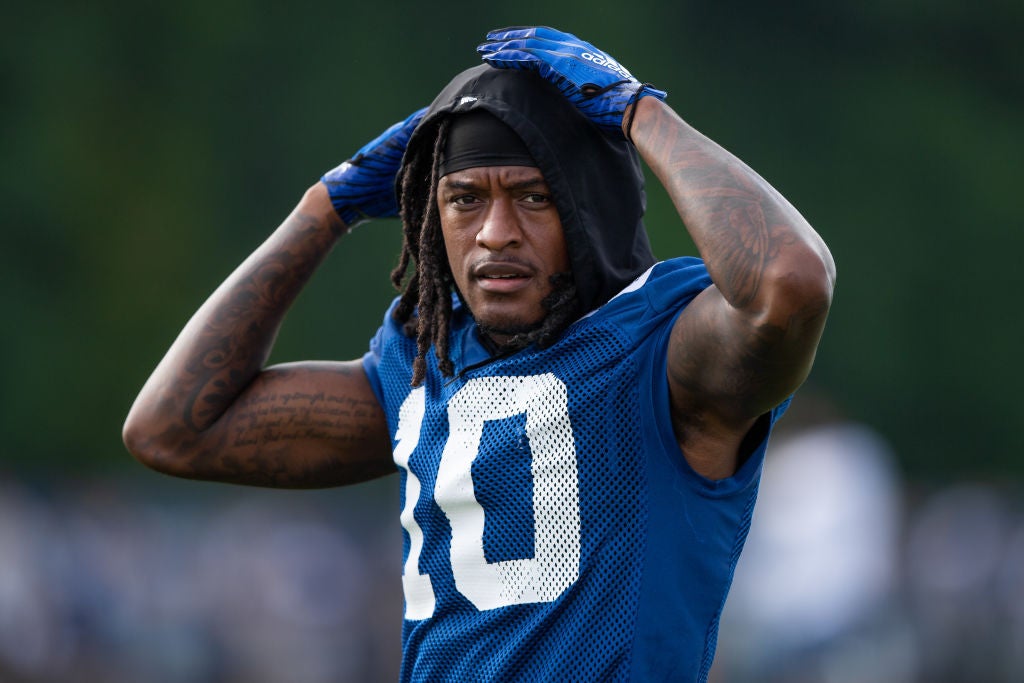 INDIANAPOLIS (WISH) — Lost in the shuffle of high school recruiting, no invite to the NFL Combine out of the University of Northern Iowa, a quiet rookie year with the Colts. Somehow, nothing derailed the dreams of Colts wide receiver Daurice Fountain.

During the Colts 2019 training camp, the 24-year-old former prep track and football standout from Madison, Wisconsin, put together the best football of his young career.

Highlight reel grabs, with the help of his highly touted leaping ability, wowed Colts fans at Grand Park in Westfield. Later, the preseason opener at Buffalo marked Fountain’s coming out party on offense.

The second-year pro hauled in a team-high five catches for 63 yards and appeared to be well on his way to regular-season playing time after spending nearly all of 2018 on the Colts practice squad.

But following the impressive showing against the Bills, Fountain found himself in the middle of an NFL nightmare.

During a joint practice with the Cleveland Browns, Fountain sprinted off the line of scrimmage and out for a passing route, suddenly dropping to the grass in excruciating pain.

Fountain soon faced surgery for a gruesome ankle injury. And that was just the start.

“A lot of people don’t know this, but I went through three surgeries throughout this whole process,” Fountain said. “It took a toll on me.”

“There was a time where people were telling me, ‘If this bone doesn’t heal, this (NFL career) could be it,'” Fountain said.

Fountain watched as franchise quarterback Andrew Luck abruptly retired, Jacoby Brissett stepped in and jumped out to a 5-2 start, later tailing off along with the Colts record, in part due to a lack of playmakers on offense.

As 2019 concluded, Fountain’s plan for 2020 started to come into focus. Complications surrounding surgery on his fractured and dislocated ankle subsided. Fountain was back to running, lifting and training this offseason in Dallas.

Ahead of the Colts 2020 training camp, somehow, Fountain finds himself ready to make his return.

“I am just itching to get back out there, I am just smiling so much talking about it,” Fountain said. “I am trying to calm the nerves, we still have a little while before we can do football stuff, but I can’t help it.”

Over the last 11 months, Fountain leaned on surprise messages and well wishes from Colts fans across the city. It’s the same message that Fountain’s biggest fan delivers often — without having to say much.

“Throughout this whole process, (my daughter) Sienna has been a safe haven to me,” Fountain said.

“Honestly, throughout all the adversity, the long nights, the sad times I have been through … Every time I gathered around her, none of it mattered.”

Fountain’s daughter, Sienna, will turn 2 just ahead of the Colts home stretch of the 2020 regular season.

What a bedtime story it would be if dad found his way into Philip Rivers’ reliable stable of options on offense.

“When she first said her words to me, ‘Hi, Dada’… oh my gosh, my heart dropped to my stomach. I love that girl so much, she means the world to me.”

But hearing “Dad” certainly makes any doubts disappear for Fountain.