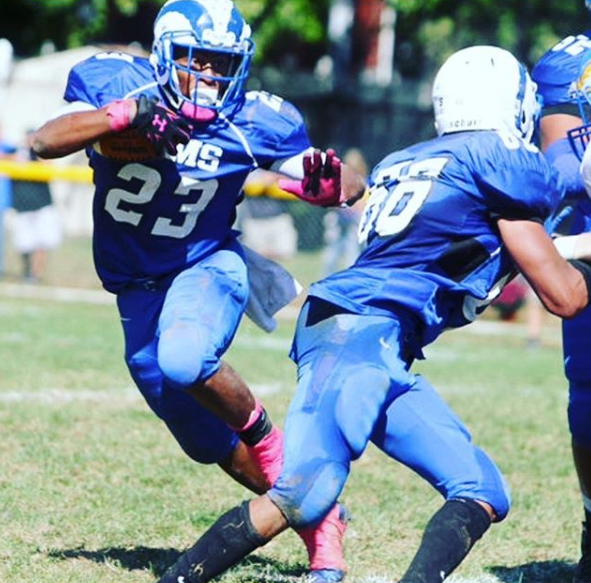 INDIANAPOLIS (WISH) — The lyrics inside Jonathan Taylor’s journey to the NFL could flow flawlessly into a Bruce Springsteen chart-topping hit.

A young talent, silently crafting his passion into a remarkable talent the world needed to see.

Any stage (or field) he steps on? The Boss.

Here in Indianapolis, Taylor is in the middle of his first NFL training camp after being plucked in the second round by a fellow Wisconsin Badger — Colts General Manager Chris Ballard.

What Ballard may have not known on draft night? Blue and white works just fine for this workhorse. It signifies home.

“When a guy from a small town like that has the opportunity to play in the highest level of football, it is a big deal,” Taylor said. “I just want to put my best foot forward.”

“It is crazy, you can’t really put it into words, coming from a town like Salem, New Jersey, it is like a mile long, population of 3,000 people,” Taylor’s former high school football coach Montrey Wright said.

“There are times when you are like, ‘Jonathan, man, just tell us you are good. Let everybody know you are the best running back in the country.'”

A late offer from Wisconsin trumped an earlier commitment to nearby Rutgers.

But this doesn’t mention the most interesting aspect of Taylor’s recruitment: A legitimate interest in heading to Harvard.

“When he went on campus, it gave him a sense that, (Harvard) had players that had SEC offers that chose that degree over anything because they were worried about the next 40 years,” Wright said.

“That kind of fits Jonathan’s character, he wants to set himself up for the next 40 years, instead of the next four. It (Harvard) was hard to resist. It is Harvard.”

Taylor, who has interests outside of football that include space, astrophysics, and reading up on all things Neil deGrasse Tyson, studied philosophy at Wisconsin.

The cerebral approach on the field left Camp Randall Stadium up for grabs each of the last three seasons.

Three-time All-American. Two-time Doak Walker Award winner as the nation’s top running back. The lone player in FBS history to rush for at least 1,900 yards in three consecutive seasons.

6,000 rushing yards in just three collegiate seasons? Taylor is the only FBS player who can say it’s possible.

So, how does the resume look, Indianapolis?

“JT (Jonathan Taylor) is phenomenal, ” Colts All-Pro Linebacker Darius Leonard said after a recent Colts training camp practice. “He showed it throughout college, and now he’s showing it throughout camp.”

“He is a beast, man,” said Colts running back Marlon Mack. “Teams should be aware of him, right now. Be ready for it. ”

You read that correctly. Marlon Mack, going out of his way to compliment his potential heir apparent. That statement says a ton about Mack as person.

Also, it is a glimpse into the talent of a rookie who has essentially been on an NFL practice field for five minutes.

In 2020, Taylor is the backup at running back for the first time since his sophomore season at Salem High School.

But even before his first NFL carry, Salem already got a big lift.

“Jonathan Taylor is a wonderful guy, he is cool,” Salem sophomore football player Zaheim Jones said. “It was crazy, he came from Salem. No one from Salem really goes that far and makes it to the league.”

Coach Wright and the Rams hope to start their season in early October.

He heads into the fall with a “perfect example” to point his players toward.

“He started something that is beginning to be contagious in our city now, where kids have hope.”

Born to run. Born to lead. That is what Jersey’s own Jonathan Taylor carries to the NFL.